Alarming bid for BHP board seat 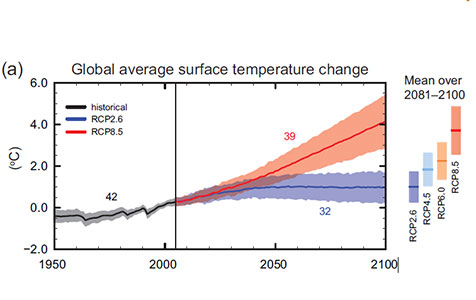 GOING WHERE? This graph shows different scenarios from four different models used by the IPCC. Only one, the most extreme at the high end, anticipates temperatures at or above a 4C degree rise which is the basis of Ian Dunlop's BHP board tilt.

One of the downsides of international investment is that people with a different worldview can start influencing the ways things are done in Australia.

Often seen as xenophobia, the extremes of politics, both left and right, are oddly united on causes such as foreigners buying mines, property developments or farms.

Yet one of the most extreme attempts at foreign interference comes in a much more mainstream form – a big US-based fund manager wants to put a climate change alarmist on the board of BHP Billiton as a form of risk mitigation.

Mr Dunlop, who will find out how his board bid pans out at today’s meeting, is a maverick who believes his former industry is causing catastrophic damage to the planet, and that BHP ought to be doing more to address climate change.

He takes an extreme point of view, with the key premise of his attack on BHP being that we are facing an emergency of “a world where population would fall from the current seven billion to below one billion” caused by a series of climatic changes wrought by an average temperature increase of 4º Celsius above pre-industrial levels.

I don’t know where he gets that information from but it is a dubious platform to run on, one that is so extreme I have not heard even the architects of Australia’s carbon taxes and emissions and trading schemes make such an alarmist case.

Even the United Nation’s own Intergovernmental Panel on Climate Change, in its most recent advice, doesn’t offer such a bleak assessment.

The IPCC’s recently published working group contribution to its fifth assessment report for policy makers takes a far more restrained view of the chance of such temperature rises, and doesn’t mention massive population loss at all.

Thus far, the IPCC says we have endured a rise of less than a 1ºC since the 1850–1900 period and, through modelling, suggests that by the end of the century it is unlikely under most scenarios that temperature will rise by more than 2ºC in total.

From what I can see, the idea of a 3ºC rise from current temperatures (ie a 4ºC rise from 1900) over the next eight or nine decades is considered a strong possibility under only one of the four modelling scenarios used by the IPCC. See the IPCC’s graph, which shows that most modelling has lower expectations.

Danish economist Bjorn Lomberg reckons that while the most likely scenarios have a small net negative economic impact, that is so low that we could easily be dealing with the issue with a simple and coordinated research effort – hardly the kind of dire warning that Mr Dunlop has engaged in.

In his extremist position Mr Dunlop has either cherry-picked the outlier or is looking so far into the future that even the IPCC, which climate sceptics hate, doesn’t dare fantasise about, because to do so would be totally unscientific.

Why is it that only those who are less concerned about climate change are always the ones who are told to heed the science?

I have not read one critique of the wannabe director’s stated position. In most articles it is seen as a David and Goliath battle with the added twist of a coal insider who has turned on his former paymaster. If he were a qualified scientist who doubted the IPCC climate change position, his argument would have been torn to shreds or some link to big oil would have been dug out.

As it is, anyone reading Mr Dunlop’s views would be hard pressed to take him too seriously.

How on earth CalPERS, a fund manager that looks after health and retirement benefits on behalf of more than 3,000 public school, local agency and state employers, can back someone voicing such unrestrained alarmism is beyond me.

California might be something of a fantasyland, but if this is the sort of thing Australian companies have to start worrying about then perhaps the xenophobes have misplaced their concerns about foreign investment.