Western Australia's business sector has reacted with alarm to the growing certainty the federal government will introduce a new tax on mining profits, with industry groups and mining leaders united in their opposition to the plan. 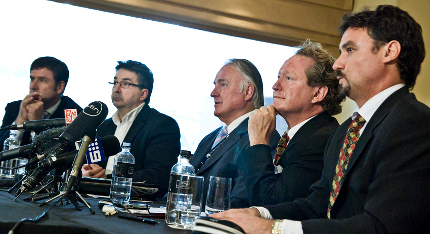 Western Australia's business sector has reacted with alarm to the growing certainty the federal government will introduce a new tax on mining profits, with industry groups and mining leaders united in their opposition to the plan.

Mining leaders led by Fortescue Metals Group boss Andrew Forrest, the Chamber of Commerce and Industry of WA and the Chamber of Minerals and Energy have all come out today declaring their opposition to the proposed resources rent tax (RRT).

"For politicians in Canberra to propose a tax smash and grab just as the resources industry is getting back on its feet after the effects of the GFC is particularly bizarre," the industry leaders said.

Mr Forrest highlighted the resource industry's key role as an economic driver out of the GFC.

"The resources industry was the sustained economic driver out of the GFC. You shouldn't kill the golden goose, you'll be left with no geese," Mr Forrest said.

The group called for the federal government to urgently consult with the industry before irreparable harm to the national economy is done.

They also argued that overseas investment will become more attractive as the potential double-tax will act as a deterrent for investment in the resources sector.

BC Iron managing director Mike Young said "BC Iron has a main priority and loyalty to its shareholders and will do what it takes."

He added that his company is currently looking at an overseas option which now "looks a lot better".

The RRT is one of the recommendations of the Henry tax review, which is being released in Canberra on Sunday.

CCI chief executive James Pearson said he was deeply concerned by comments made by the Prime Minister yesterday indicating that WA will be penalised for its economic success.

"Western Australia is being relied upon more than ever to shoulder the responsibility of driving the nation's economy forward," Mr Pearson said.

"It makes no sense to introduce new taxes and charges that will further erode the international competitiveness of the sector, on which almost all WA businesses, directly or indirectly, depend.

"At the same time, the WA Government has made clear that the State will continue to charge royalties even if the Federal Government pushes ahead with a national resources rent tax.

"It would mean that a key WA industry will be taxed twice.

"It is not only unfair, but will disadvantage our mining and resources sector at a time when we need them most. It also sends a negative message to prospective investors about the benefits of doing business in Australia.

"Months of uncertainty surrounding the detail of the Henry Tax Review will end this weekend when the Review is finally released. CCI and other business groups have been calling for this for months.

"CCI will carefully examine the report and continue to work for a better and fairer tax system for local business and industry."

"It's inevitable that a supertax could see some fall off the books," Mr Howard-Smith said.

"If the federal government essentially makes Australia the highest taxing mining province in the world, there's a real risk investors and companies will shift attention to offshore projects.

"Given the track-record of WA being short-changed on GST payments and other revenue streams, we have serious reservations about funds from a supertax on profits leaving the state, never to return."

Australia's growing iron ore industry has today expressed extreme concern over the potential imposition of a Federal Resources Rent Tax on the industry, in addition to the existing long standing State-based royalty scheme.

Iron Ore is Australia's single largest export resource and Australia is one of the world's largest exporters of iron ore. ABARE forecasts that over $35 billion dollars in export earnings will be generated by the sector in 2010.

A number of iron ore executives believe the imposition of a new tax on the growing sector would have a disastrous effect on future investment in the industry. Collectively they are calling on the Federal Government to urgently consult with the industry before imposing a new tax burden.

"Iron Ore generates substantial wealth for Australia, but the future health of the industry cannot be taken for granted. Iron Ore mines are large expansive projects which require billions of dollars in capital to establish. A Federal tax imposition severely jeopardizes the ability of Australian companies to access this capital in future.

"For politicians in Canberra to propose a tax smash and grab just as the resources industry is getting back on its feet after the effects of the GFC is particularly bizarre. As an industry we are ready to lead the national economy out of the GFC and generate continued real economic growth for the country, not stimulus supported activity."

"We do not believe that slowing down the progressive national wealth generating sectors of the economy to match the pedestrian speeds set in other states and sectors is in the best interests of Australia. The best result for Australia is to get the pedestrian economies running at our speed. As confirmed recently by the Reserve Bank Deputy Governor, all parts of the Australian economy benefit from strong conditions in the mining sector."

"We also have grave concerns about the incentives this gives to foreign owned miners extracting Australian resources for sale to their home country. As a tax based on profits, unlike State based royalties based on production amounts, the incentive for offshore based miners to minimise stated profits whilst producing and extracting as much of our resources as possible is only enhanced.

"We need a supportive Federal Government, working to solve our infrastructure, investment and skills challenges, not trying to stifle growth and grab as much revenue as possible from the industry.

"The Federal government cannot treat the iron ore industry as a cash cow to be continually milked, as Australia is not the only country blessed with iron ore resources. Over the past years Australia has lost iron ore market share to other countries in the industry, such as Brazil and the fast growing supplies of India. A prohibitive taxation regime will only encourage this move, as scarce international capital is devoted to other existing suppliers as well as the building of new supply sources in Africa."

"We believe the Federal Government needs to urgently consult with the industry it intends to establish this punitive new double taxation regime on, before irreparable harm to the national economy is done."