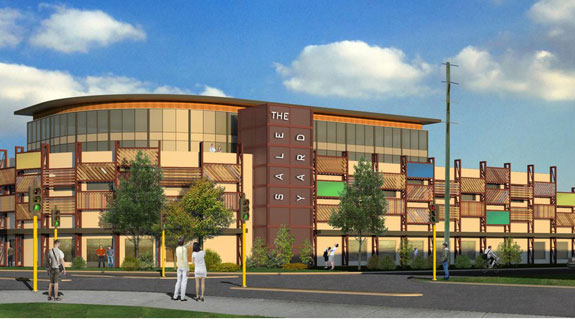 An artist's impression of Aigle Royal's plan for the Midland Saleyards.

Tony Poli's property development vehicle Aigle Royal has won its biggest job to date in Perth’s property market, with the state government naming it as its preferred proponent to develop the former Midland Saleyards site.

Mr Day said he expected around 500 workers to find employment at the redeveloped site.

He said it was another step towards the redevelopment of the eastern suburbs.

“Together with a new medical and education precinct, including a new public hospital opening in November and proposed plans for the new Curtin University medical school, Midland’s exciting future is rapidly taking shape,” Mr Day said.

“Great success is also being experienced in the residential market, with all lots within the Railway Square precinct now under offer or sold to a range of private developers with plans for new housing and short-stay accommodation.”

The Midland Saleyards closed down in 2010, after it was replaced by a new livestock selling facility in Muchea.

It had been operating since 1910 as the state’s largest sheep, cattle and pig saleyard.

Aigle Royal made its first splash in Perth’s property market in February this year, when it bought a shopping centre development site in Wattle Grove.

The developer followed that up by buying 59ha of residential land at Port Geographe, while it is also understood to have bought a Woolworths development site near Mandurah in recent months.