Age no barrier for Hollywood role 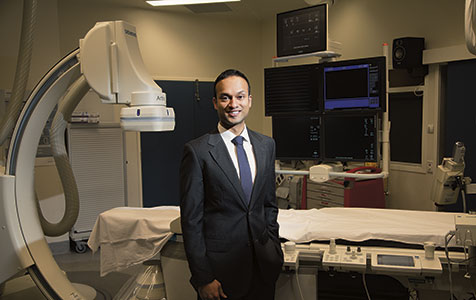 The business community in Western Australia is full of go-getters, but few have made their mark so early in their career as Daniel Heredia.

At just 31 years of age, Dr Heredia was last year appointed director of medical services at Hollywood Private Hospital – a role that includes responsibility for more than 800 medical specialists.

Not only is Dr Heredia the youngest person ever appointed to the role at Hollywood, he is also the youngest medical director at any of Ramsay Health Care’s 117 hospitals across the world.

The role allows Dr Heredia to combine his medical training with a long-held interest in the business of healthcare. It was this passion that prompted him to take on an MBA at Curtin University during his evenings while juggling medical roles during the day. He graduated in 2011 as the top-ranked MBA student across two cohorts.

“For me, I knew quite early on that I enjoyed medicine and the clinical aspects but I really liked the business side as well,” Dr Heredia told Business News.

“I wanted to get into a role where I could be at the interface of the two things and I didn’t want to have to do a 20 or 30-year career in clinical medicine before I had the chance to do that.

“What really appealed to me in terms of the health management aspect was the bigger picture nature of it. When you’re in a clinical role, it’s extremely rewarding because you’re helping people on an individual basis … (but) the advantage of a role like this is if we do things right, we touch the lives of more than 50,000 patients a year.

“A lot of people struggle with that concept and say ‘how can you like health but also make a profit?’ But in my view, the only way we can reinvest in health is if we make a profit and you make a profit by running the business well.”

That interest in health management drove Dr Heredia to become the youngest person appointed to the role of medical adviser at Medicare Australia at just 26 years of age. He was quickly asked to lead a restructure of Medicare’s compliance division in Tasmania, where he said there emerged some hostility due to his youth.

“That’s been a challenging aspect for me throughout my career because a lot of people do attach credibility to age,” Dr Heredia said.

“If you’re coming in at a relatively young age and having to do something that can influence people’s livelihoods and their work environments … it was understandable to have some hostility and anxiety around that.

“My approach in that situation, which is similar to my approach always, was to focus firstly on the relationship and to me, a key element of building a relationship is being transparent and honest.”

Dr Heredia’s achievements are made all the more impressive by his modest upbringing. His family moved to Australia from India when he was a young boy, and with his parents’ qualifications not recognised in their adopted home, the family relied on the support of friends, the local church and charity groups to help make ends meet.

Dr Heredia said these experiences instilled in him a sense of fiscal responsibility and the ability to effectively communicate with patients from a wide range of backgrounds – both essential strings in his health management roles.

As medical director at Hollywood and a state councillor for the Australian Medical Association, Dr Heredia deals with the big issues in the WA health sector on a day-to-day basis, including the growing demand for health services and the perennial issue of staff shortages.

He has also led research into the issue of burn out among junior doctors, raising awareness of the importance of stress management.

He is also keen to dedicate his time to board roles in the not-for-profit sector.

“I think I’m now at a point where I can start to offer something,” he said.

“I’ve learnt a fair bit on the business and health side and I’d like the opportunity to give a little bit more back.”