Advanced tech all part of the drill

As management and staff at Woodside Petroleum keep a watchful eye on the development of their new digs at Capital Square, the company is not waiting to move to its high-tech building to develop digital capability. 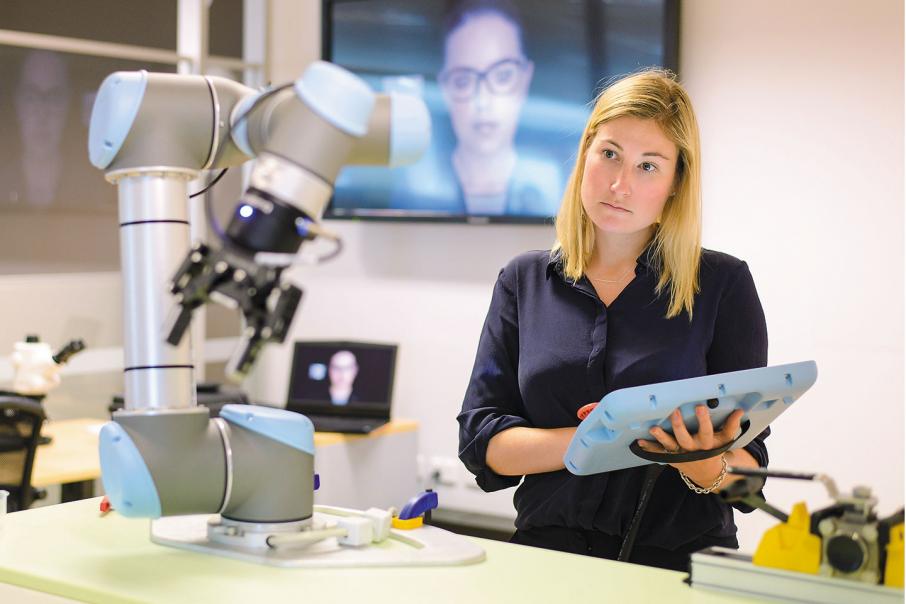 Woodside robotics and cognitive science adviser Alison Barnes demonstrates a universal robot with an avatar looking on in the background. Photos: Lloyd Summers

Woodside believes its investment in technology is already paying dividends.

As management and staff at Woodside Petroleum keep a watchful eye on the development of their new digs at Capital Square, the company is not waiting to move to its high-tech building to develop digital capability.

Instead, it has a few dozen staff and secondees from partners such as the National Aeronautics and Space Administration (Nasa) and IBM, working on cutting-edge projects that belie the widespread view of resources as an industry that does little more than dig dirt and sell it to sophisticated customers overseas.

Most notably, the company is using IBM’s Watson technology to query 30 years of historical internal data. It is also developing expertise in robotics, using AI to create machines capable of operating autonomously in remote locations (and learn from their experience). It has taken delivery of a Nasa Robonaut as part of a joint venture between the two organisations.

Furthermore, it is also developing avatar technology that provides a more human interface for its AI.

And that is just part of the project; being able to accurately dredge up lost data from decades ago is one thing, but Woodside is also at the cutting edge in its field in data analytics, using computing power, Amazon’s Alexa system and a growing array of sensors to improve productivity and reduce the risk of failure.

The next step, Mr Gregory said, was blending these two platforms so the AI, finding and understanding data, and the analytics, processing the data for answers, operated together seamlessly to the user.

In the oil and gas business, fine tweaks can result in huge financial benefits and avoid massive costs.

“The productivity in just our current people’s time has more than paid for both platforms,” Mr Gregory said.

Perhaps as intriguing as it is to discover that Woodside has a well-populated innovation laboratory occupying a floor in the CBD is to learn that it operates like a startup.

Mr Gregory said the methodology applied was starkly different from historic big technology projects that typically ran over time, over budget and failed to live up to expectations.

He said Woodside had overcome that by focusing on getting prototypes into the hands of users as fast as possible.

“Get the minimal viable product out in days, overnight, weeks at max; don’t let an IT project go for years,” Mr Gregory said.

“I think that has been the biggest success factor.

“There has been a challenge because when the minimal viable product comes out, in IT, it looks a bit raw.

“But it quickly iterates and people get used to giving feedback on something that is a wire frame.

“Next week it is looking good and three weeks later it’s got a human-like head on it and so it also therefore drives different culture in the team about getting it out to the business to get feedback.

“They love to deliver the next incremental addition to the functionality so you end up in this infectious constant delivery cycle.”