ADAMS Group founder Adam Barnard has sold his stake in Western Australia’s biggest tour operator and will step down as a director on March 1, but will remain involved with the company as a consultant to guide it through an expected phase of rapid expansion in the state’s tourism sector. 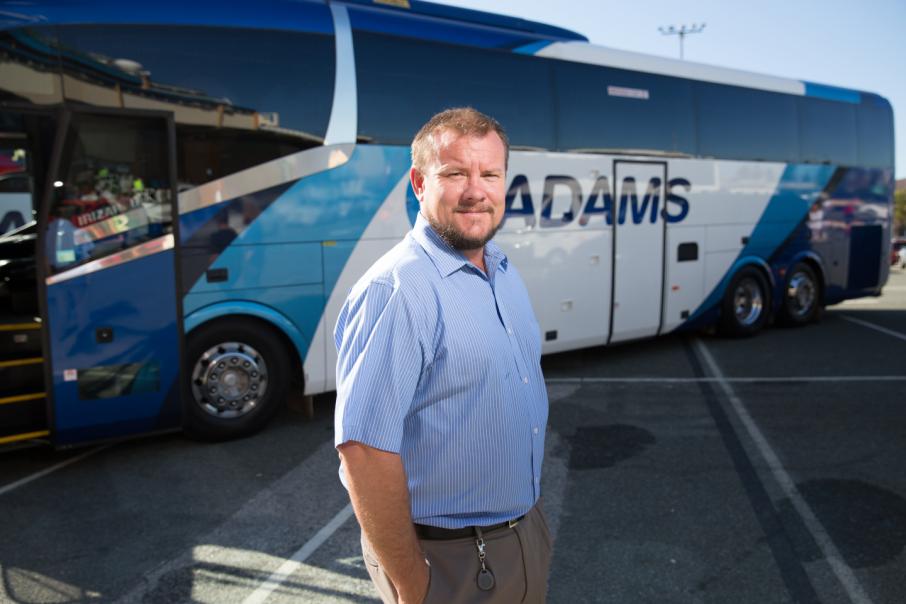 Adam Barnard is looking forward to a well-earned break after the sale of Adams Group to Rottnest Fast Ferries. Photo: Attila Csaszar

ADAMS Group founder Adam Barnard has sold his stake in Western Australia’s biggest tour operator and will step down as a director on March 1, but will remain involved with the company as a consultant to guide it through an expected phase of rapid expansion in the state’s tourism sector.

Having run Adams since its establishment with one $30,000 coach in 2005, Mr Barnard said the timing was right to sell the business to Rottnest Fast Ferries co-owners James Mulholland and Luke Crispin.

The company currently has a fleet of more than 50 buses and runs charter operations as well as guided tours across the state under the brand Adams Pinnacle Tours.

Mr Barnard told Business News he was approached by a large multinational tourism operator in September last year, which sparked internal board discussions regarding the sale of his stake in the company.

While Mr Barnard said he could not disclose any commercial terms of the transaction, he said the new owners were poised perfectly to guide the company through its next phase of growth.

He said the launch of direct flights to Tokyo through All Nippon Airways would be the catalyst for the state’s tourism sector, which has largely missed out on rapid growth in international visitation that had occurred in other states.

“When the Japan flights start, it will take us back to the 1980s and 1990s when ... Japanese tourism into Western Australia was just monumental,” Mr Barnard said.

“They aren’t a self-drive market, they are a market that travels entirely by coaches, whether that’s individuals or in groups.

“We have positioned ourselves as the largest tourism transport operator here in Perth so I think the business will go through a period of quite extensive growth.”

Mr Barnard said the Rottnest Fast Ferries co-owners would also have the opportunity to build on significant momentum on the very island they deliver tourists to each day from Hillarys Boat Harbour.

Adams Group has been providing bus services on Rottnest Island since 2015, when it became the first private sector tourism business to operate on the holiday hotspot.

“There has been some very solid growth on Rottnest Island for the last couple of years – our business has grown by about 40 per cent for the last two years,” he said.

“The opportunity for James and Luke to dominate that space is there and also to consolidate certain aspects of the business like finance, sales and marketing, etcetera.

“There is a lot of synergy for them to continue to grow the business.”

Adams Group became one of WA tourism’s most awarded companies under Mr Barnard’s ownership, with the company named Telstra’s Business of the Year for WA in 2013 and 2016, winning the state’s top tourism prize – the Sir David Brand Award – in 2016 and inducted in the Tourism Council WA’s Hall of Fame in 2017.

Mr Barnard was also named a winner in the 2008 Business News 40under40 awards, taking out the entrepreneur category.

While he will remain with Adams as a consultant, Mr Barnard said the first thing on his agenda would be taking a break in Broome for its upcoming tourist season.

“Nothing is off the table, except for the fact that I want to have a nice break,” he said.

“I’ve been heavily involved in the future direction of Adams, everything is all laid out, we’re just waiting for the tourists.

“I’m committed to the brand and I’m excited to see the brand continue to grow - that will be my legacy from it.”

Following that, Mr Barnard said he was also keen to focus on the aviation sector, particularly in helping international and interstate visitors travel to far-flung attractions across the state.

“Aviation is a passion of mine. I’m a private pilot and I’ve been an aviation enthusiast since childhood, and I’ve got a lot of plans that I am working on as part of my decision to leave, in regards to regional aviation and dispersal.

“That’s a massive problem in this state, people can come here but it’s too far to drive and too expensive to fly to a lot of our attractions.

“We need to solve this somehow and I’m pretty confident I’ve got a good plan.”