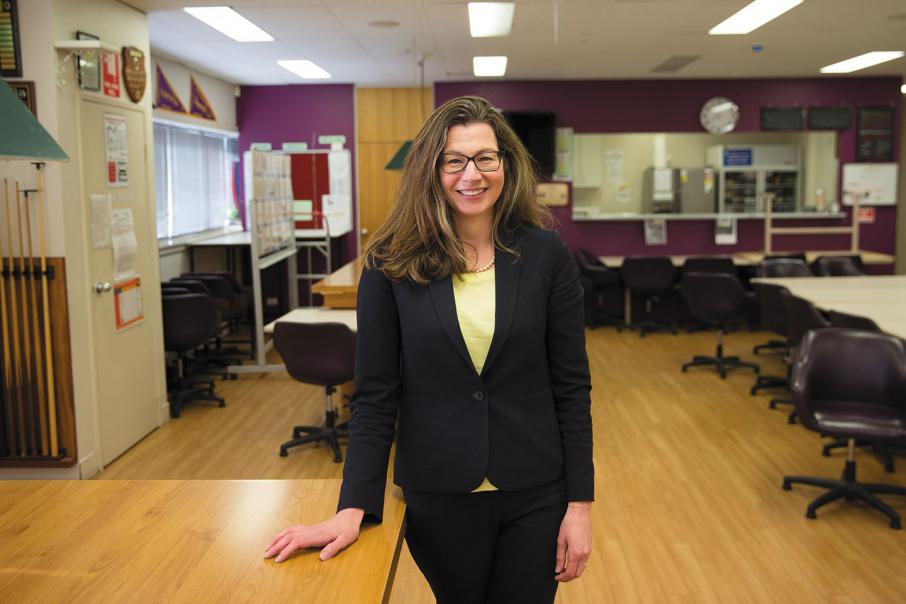 Enabling deaf people to re-engage with the state’s peak advocacy group as it transitioned to the National Disability Insurance Scheme was one of the key factors behind Rebecca Adam’s appointment as interim head of the WA Deaf Society.

Early in 2016, the society started the search for a leader familiar with deaf culture and organisational transformation to assist with the shift to NDIS, which will be rolled out later this year.

As an IBM veteran with 17 years’ experience in executive roles across project and customer delivery, and exposure to strategic redevelopment during her time at Deaf Children Australia, Ms Adam ticked all the boxes.

Ms Adam communicates in Auslan, the sign language of the Australian deaf community, and her comments were expressed to Business News through an interpreter.

One in six Australians is affected by some form of hearing loss, and Ms Adam is just one of about 30,000 deaf Auslan users with total hearing loss.

Ms Adam said although she came from a deaf family, 95 per cent of deaf people were from hearing-family backgrounds.

“Deaf people are 15 per cent less likely to accomplish year 12, so you can imagine the hearing parents who have a deaf child, they think they are disadvantaged already, which is not true at all,” she said.

“Deaf and hearing people are born with the same capacity for learning, yet the life outcomes for deaf people are not at the level of their hearing peers.”

The 2.2 million Australians with a disability, aged between 15 and 64 years, have lower participation (53 per cent) and higher unemployment rates (9.4 per cent) than people without a disability (83 per cent and 4.9 per cent respectively), and are also twice as likely to be in the bottom 20 per cent of gross household incomes, according to the Australian Network on Disability.

Considerably, 39 per cent of complaints lodged with the Australian Human Rights Commission against businesses are related to disability.

When seeking out her career pathway, Ms Adam firstly considered how she could transform society for the betterment of deaf people, eventually deciding to study law.

Armed with a note taker, high literacy skills, and a passion for social justice, Ms Adam became the first signing deaf person in Australia to graduate in law.

“Some people look at deaf people and think that they are unable to do anything,” Ms Adam said.

“It makes people think twice that deaf people are able to achieve things, that they have the skill set and talent.”

In 1998 she became the first signing deaf person in Australia to be admitted to a Supreme Court as a barrister and solicitor, and later became a member representative of numerous attorney general councils on discrimination and disability.

Now, Ms Adam has achieved another impressive first with her appointment as the new interim and first deaf chief executive for the WA Deaf Society.

“It’s people’s perceptions and society’s in general that I’m trying to change and influence, and that’s one of the reasons why I am here,” Ms Adam said.

“It’s rare to have a person with a disability lead an organisation, so hats off to the board for having the confidence in me to do so.”

For the next 12 months, Ms Adam plans to conduct a strategic review, form new corporate alliances and increase the organisation’s engagement.

“I’ve only been here a few days but I can see we need more engagement with the deaf and wider community on all levels; customers, staff members and stakeholders,” she said.

“Engagement is king and will determine how successful we are.”

The NDIS will change the way the organisation has traditionally operated, as funding will transition from government to a consumer-choice model, with payment to the Deaf Society post-client engagement.

By setting up advisory committees and think-tank sessions to glean feedback on services, Ms Adam aims to get deaf people more involved in the organisation’s development.

“I want to re-engage so that they feel like this is their organisation again,” she said.

“And now the organisation’s survival will be based on having as many happy customers as possible.”

Just more than a quarter of the WA Deaf Society workforce is made up of deaf professionals and, in the past three years, the organisation has placed over 100 deaf people into employment.

The organisation has no corporate sponsors or partners, but this is something Ms Adam wants to change, suggesting Woolworths and Wesfarmers as two companies she’d like to align with.

Ms Adam will also create a deaf-friendly recruitment process for an ongoing chief executive to start in the middle of the year.