SPECIAL REPORT: Urban Quarter has taken a counter-cyclical approach in building its project pipeline, securing more than $70 million worth of freehold land developments in the past four years. 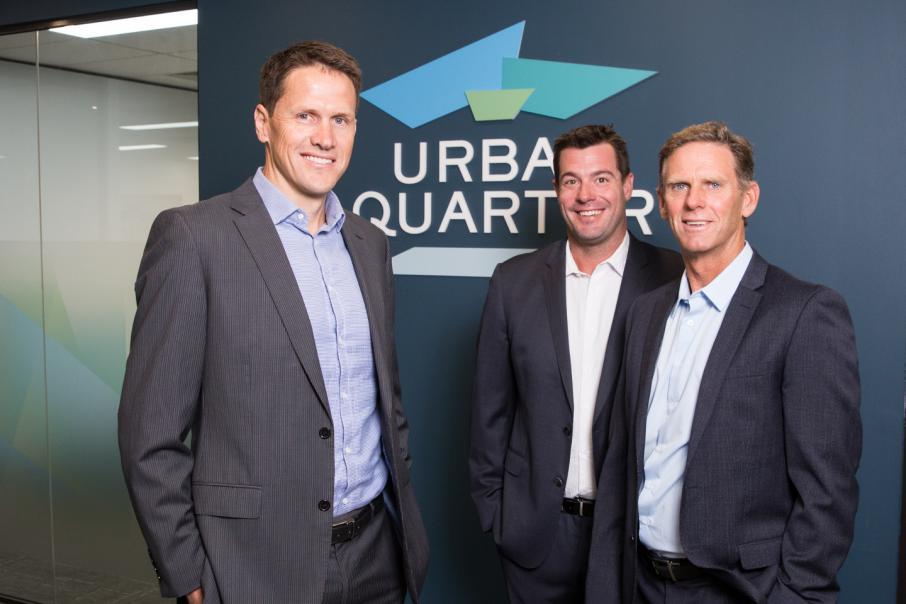 Stuart Reside (left), David Barham and Jason Wallis have created a diverse portfolio they hope will put the business in a good position for the next market cycle. Photo: Attila Csaszar

Urban Quarter has taken a counter-cyclical approach in building its project pipeline, securing more than $70 million worth of freehold land developments in the past four years.

The tide is turning on the oversupply of titled land in Perth that has resulted from slow population growth and challenging economic conditions since 2014, according to Urban Quarter general manager Stuart Reside.

The Perth-based developer currently has six major projects on the books, representing about 3,000 lots and an end market value of more than $700 million, with half of these purchased in the past four years.

It has since grown to a team of 10, led by Mr Reside and senior development manager David Barham.

By keeping the team small, Mr Reside said the business had developed a culture that enabled it to operate on a more personal level with buyers, government agencies and stakeholders, which he saw as an advantage over larger players.

“In acquiring new land parcels, Urban Quarter seeks to be counter cyclical and use the financial capacity of the group to set up low-geared projects. We always look for land with amenity.

“We have a good range of projects delivered by a relatively small but experienced team, competing with some of the bigger organisations around town.

“If you’re operating in this industry on a shoestring, or if you buy a project badly or get forecasts significantly wrong then you can come unstuck – fortunately we’ve been able to avoid those pitfalls.

“Everyone wants to be countercyclical; we’re not pioneers by any stretch, it’s just what we try to do and I think we’ve been able to execute it reasonably well over the past few years and hopefully put ourselves in a good position for the next cycle.”

The group’s latest acquisition is a 140-hectare parcel it has called East on the Beach at Eglinton, 40 kilometres north of the CBD, which it plans to develop over the next 10 years.

Work at the Eglinton coastal residential precinct will begin later this year, with the potential to also include a major service commercial business park located between the future Mitchell Freeway extension and Wanneroo Road

Other recent acquisitions include the 1,150-lot Springtime in Haynes development, a private estate of three villages south of Perth, and Dunsborough Lakes, which the group purchased in 2014 and changed the masterplan to create larger blocks for families.

Mr Reside said projects across the group’s total portfolio regularly provided a combined 200-400 developed lots to the market each year, placing Urban Quarter among the top land developers in the Perth market.

Urban Quarter is currently ranked seventh on the BNiQ Search Engine’s list of land developers active in Western Australia, and is one of the youngest organisations in the top 10 (see page 20).

“In the six months to December 2017 we have seen sales increase some 150 per cent compared to the same period in 2016,” Mr Reside said.

“That 150 per cent growth is on low values, so it’s great to be up by 150 per cent; but we’re not high-fiving just yet, we’re expecting things to trend upwards slowly.

“Early signs are positive that this current level of demand will continue through 2018.

“We’ve seen major developments open up in most of the growth corridors, which has created a competitive marketplace in the land development industry.

“So although the oversupply position is being reduced, is not going to turn around quickly – it’s going to take some time.”

He said government spending on major infrastructure projects would provide a catalyst for growth and provide opportunities for the industry.

“Projects such as Elizabeth Quay, Perth Stadium, the Scarborough beachfront redevelopment and Busselton airport expansion will act to generate improved tourism demand, which will flow through to population growth,” Mr Reside said.

“We’ve got a good pipeline and time will tell really.

“Perth is a unique location in the world; it’s safe, has a great climate and is supported by industry exports that are needed all over the world, and for those reasons I think we’ll keep growing.”