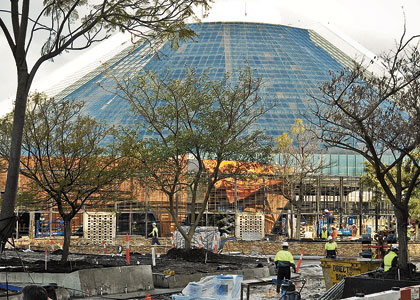 CASH FLOW: Crown is spending about $30o million on a range of expansion projects at the Burswood Complex, with more to follow when constructIon gets under way on the new hotel. Photo: Grant Currall

THERE may not be many cranes in central Perth at the moment, but there is no shortage of construction and development activity around the city fringes.

The foreshore has turned into a giant mud pit, as early site works get under way on the Elizabeth Quay development.

The railway reserve between the city and Northbridge is densely packed with tunneling and earth-moving equipment as the City Link project starts to take shape.

At the eastern end of the city, civil works are continuing on the Waterbank site, which is part of the larger Riverside project.

And over the river at Burswood, the pace of construction will increase next year when Crown proceeds with development of Perth’s largest hotel and an expected expansion of its gaming facilities.

If all goes to plan for Premier Colin Barnett, construction of Perth’s new sporting stadium will also proceed on the Burswood peninsula.

There has been a lot of debate about the merit of each of these projects, but what about their collective impact?

What thought has gone into creating linkages between these projects?

Can they be designed to enhance each other, or will they actually detract?

The latter seems the likely outcome.

While Perth is growing fast and becoming a bigger city, there is a natural limit on private sector demand for inner-city land.

And what are the attractions, the activity hubs that are going to draw people to each of these destinations?

Crown can answer that question but the government can’t.

Burswood has the casino, convention and conference facilities, a theatre, and a growing number of restaurants, bars and cafes.

Love it loathe it, the fact is that combination makes it a magnet for Perth residents and tourists.

The problem for Perth is that Burswood is physically isolated.

Compare that to Melbourne, where the Crown Casino complex and the Southbank development are co-located, right on the edge of the city and just a short walk from two of Melbourne’s major train stations.

Add in the art gallery, the MCG, Rod Laver Arena and other civic and sporting venues just a few minutes walk away, and there is little wonder that Southbank is a buzzing hive of activity.

Sydney’s Daring Harbour has similarities, as a civic development that is right next to the central city and co-located with a casino and other facilities that naturally draw crowds.

Unfortunately we can’t rewrite history, but we can plan carefully for our future.

Decision-making around Perth’s big civic projects – the foreshore, City Link and the sport stadium – has been driven to a very large degree by political imperatives.

The premier is determined to have projects underway by the time of the next election, so that he can assure voters they are sharing in the riches of the resources boom.

But that time frame is unlikely to accord with the city’s long-term interests.

The most likely outcome is that the civic projects around central Perth will take many years to attract sufficient private sector investment.

Meanwhile, the private sector, in the form of Crown, is pouring hundreds of millions of dollars into its Burswood site.

The new hotel will cost just more than $500 million to develop, lifting Crown’s total investment in Burswood to $1.3 billion.

The total number of hotel rooms at the complex will be 1,200 and employment will increase to 5,200.

All of this is underpinned by its casino, which is set to expand after the government agreed it would not oppose an application for more gaming machines and gaming tables.

Clearly, Crown’s monopoly on gaming in Perth is lucrative, but at least it avoids the damaging spread of gaming machines through hotels and clubs that has occurred in other states.

Connecting this hub of activity to the rest of the city will not be easy. The government has made a token effort, proposing a pedestrian bridge across the river to a largely residential enclave in East Perth.

An equally large challenge will be ensuring the civic projects around the city do attract money, development, and people.