Aboriginal artists are producing more art than the market is demanding, leading to 40 per cent falls in average incomes between 2007-08 and 2012-13, according to a recent government report. 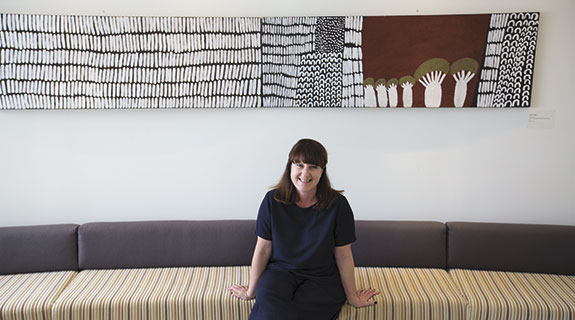 Aboriginal artists are producing more art than the market is demanding, leading to 40 per cent falls in average incomes between 2007-08 and 2012-13, according to a recent government report.

“In some areas there is a slowdown, but leading artists are still producing the level of work they were, in some ways trying to compensate for reduced amount of earnings, or those earnings being distributed amongst more people. It’s more competitive to be an artist these days,” Mr Acker said.

Mr Acker said the federal government had expanded its support after recognising the art centres had become the heart of communities in which they operated, and offered what is often the only source of income for residents.
“This is great on some levels, but ... it creates this oversupply problem,” he said.

“Like most complex problems there’s no single thing that can fix it. We’re talking to the art centres about reducing some of the oversupply ... rebuilding confidence with consumers and educating buyers around what they’re really getting.

“I think WA, to put it politely, under-acknowledges the cultural and artistic riches it has.

“A lot of Australia’s best Aboriginal artists have come from and continue to practice in WA. There’s a real kind of powerbase, if you like, of Aboriginal art throughout WA.”

Wesfarmers art collection curator Helen Carroll-Fairhall told Business News the company had amassed what was now one of WA’s biggest Aboriginal art collections, and also commissioned work because it valued the pieces so highly.

“Indigenous art is in our opinion one of the most important contributions Australia makes to world culture,” Ms Carroll-Fairhall said.

“In fact (it is) the most important contribution Australia makes to world culture, so we collect that work because it’s relevant, it’s vibrant, it’s of this place.

“It’s supporting the life of artists during their lifetime and it’s also helping to support the community centres where that art is deriving from.”