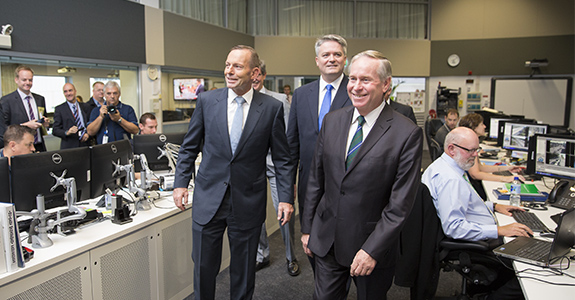 Mr Abbott said Canberra would provide $499 million towards WA roads projects, including work on the Mitchell Freeway, in response to the state’s issues with the GST revenue carve-up.

"Without additional Commonwealth support, there were important road projects of national significance that might have not gone ahead," he said.

"I am conscious of WA’s particular position and it is important for a Commonwealth to respond in its time of need."

He said the decision was what a sensible federal government did, in recognition of particular difficulties that individual states from time to time might find themselves in. Other states have said WA shouldn't get extra money until it undertakes economic reform, but Mr Abbott said the state faced revenue issues never before seen by any state and has, in many respects, led the country on fundamental economic reform.

Of the contribution provided by the commonwealth, $209 million will go towards work on the Mitchell Freeway between Burns Beach Road and Hester Avenue, while $84 million will be provided for grade separations on Tonkin Highway.

There will be a total of nine projects to receive funding assistance, including a $67 million allocation for grade separation on Roe Highway/Berkshire Road.

Premier Colin Barnett said the state's share of GST, which had fallen down to a level of 38 cents in the dollar, had never happened before in Australian federation.

“I have been complaining about that for several years, and finally a prime minister has listened and acted," Mr Barnett said.

He said the federal assistance meant that WA would stay at 38 cents on the dollar, although the state’s share would fall next year to 30 cents.

“It helps us get through a very difficult period as a state,” Mr Barnett said.

"The (original GST) deal was shocking, it should have never have been signed in the way it was - Colin Barnett was part of that," Mr McGowan told ABC radio.

Curtin University professor of sustainability Peter Newman said the federal government was wasting the cash injection on the wrong projects.

"It's raining road projects while the MAX Light Rail project dies and the rail projects outlined in the Perth@3.5m plan are being put off until 2050," he said.

"These should include progressing further privatisations, including in relation to ports, the TAB and poles and wires; the abolition of the Potato Marketing Corporation; and further deregulation of trading hours," he said.

Senator Cormann told ABC radio he was pushing for faster change in WA.

"The treasurer and I are both on the public record as saying that we would like to see the Western Australian State Government be a bit more ambitious and have a bit more of a sense of urgency when it comes to pursuing microeconomic reform," he said.

Mr Barnett said today major utilities would remain in public hands, although parts of them were under consideration for sale.

He also said getting the sale of betting agency TAB through parliament was going to prove troublesome.

“I and other ministers are spending a lot of time talking with the racing industry,” he said.

“This is the opportunity to modernise the industry. People don’t go to the races because they don’t find it attractive anymore.

“The industry can’t ignore that issue.” Senator Cormann said the state would be able to access significant federal incentive payments towards further investment in job-creating economic infrastructure, when re-investing the proceeds of any privatisations into such infrastructure projects.

In late April, the state government announced its decision to abolish the potato industry regulator, the Potato Marketing Corporation, after the 2017 election, but said it was willing to consider changes to eliminate some of the most controversial legislation governing their trade.