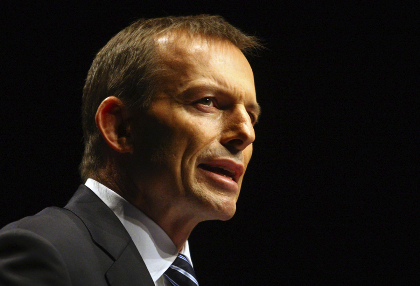 Opposition Leader Tony Abbott's motion of no confidence in Prime Minister Julia Gillard has failed, after the vote fell short of the overall majority required.

The motion to suspend parliamentary business was lost with votes split 73 in favour and 71 against, but short of the overall majority required.

An absolute majority of 76 votes is required for a suspension motion to pass.

It was supported by three other independents - Tony Windsor, Rob Oakeshott and Andrew Wilkie.

Mr Abbott said his motion was about the decent, honest, hard-working people of Australia who deserve a strong, stable and confident government.

"This is about reassuring the Australian people that we are a great people and we are a great country, just momentarily let down by a very poor government," Mr Abbott said.

"This is a government in deadlock," he said.

This is a government in crisis.

"A house divided against itself cannot stand".

Mr Abbott said a poor government had lost its way and most of its MPs were embarrassed.

"It just gets worse and worse," he said.

Mr Abbott said he had seen enough of politics and enough of good people on both sides of politics to have some respect for the the Labor Party.

Mr Abbott said it was time for Ms Gillard to go.

"We are a great people, we are a great country, I very much fear we can never reach our potential under this prime minister."

Opposition deputy leader Julie Bishop said the independent and Green MPs whose support allowed Ms Gillard to form a government now needed to search their conscience and decide whether that support should continue.

"The Australian people deserve so much better than this prime minister," she said.

Ms Bishop said no matter who won the leadership ballot for Labor, there would be no stability.

"Clearly the ALP is riven down the middle. There are irreconcilable splits between factions, between camps. It is deep, it is personal, it is vicious and it will not go away," she said.

Ms Gillard said this was the same "negative dummy spit" for the opposition leader and his deputy that they have been engaged in since the 2010 election.

"The leader of the opposition just had an opportunity to indicate to the Australian people, if he chosen to take it, what his vision was for the country," she said.

"Instead, because he is unable to do that, he filled the space with the only thing he knows how to do, and that is negativity, his bitterness and politics of personal assault."

Ms Gillard said a Labor government would always work to ensure the benefit and spread across the nation.

"That is our mission, that is our creed," Ms Gillard said.