SPECIAL REPORT: Corporate advisory firm Argonaut had a lead role in two of the most hotly contested takeover battles in WA in recent times. 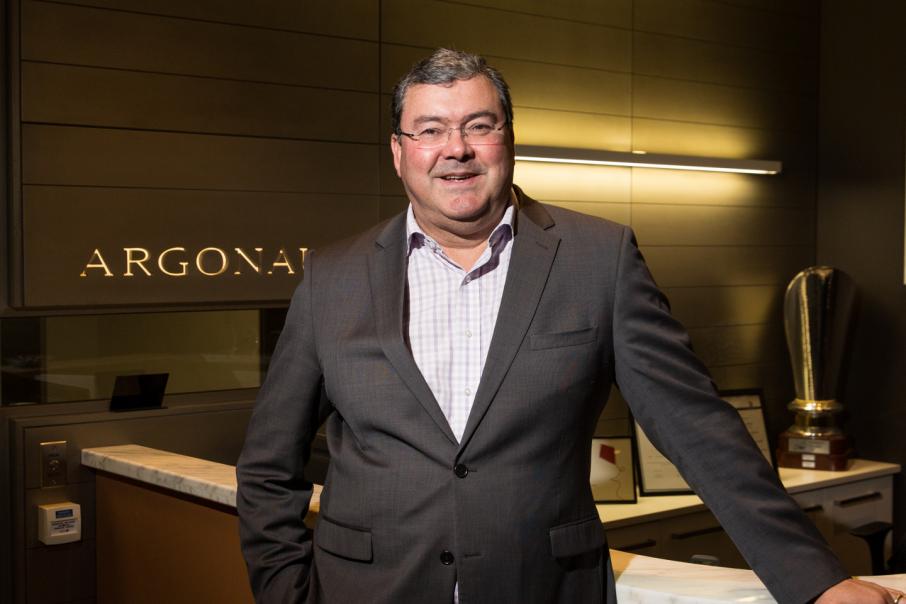 The biggest value uplift for investors in mining and exploration companies generally comes at the end of a drill bit, but it often requires a takeover bid before the value can be crystalised.

The offer is pitched at 17 cents per share, an alluring 120 per cent premium to Avanco’s last trading price.

Another recent example is the $602 million takeover of gas producer AWE, though it took three competing bidders before AWE shareholders got full value.

AWE’s big attraction is its 50 per cent stake in the Waitsia gas field, three hours north of Perth.

Waitsia is one of Australia’s largest onshore gas discoveries, and recent drilling results show it is even better than originally thought.

“Waitsia has shocked everyone by how good it is,” said Argonaut head of corporate finance Eddie Rigg, who has been closely watching drilling activity in the Perth Basin for many years.

Mr Rigg was financial adviser to China Energy Reserve and Chemicals Group, which was the first group to lodge a bid for AWE late last year.

That was the start of a fast-moving sequence of events whereby Mineral Resources lodged a competing bid, then lifted the value of its offer and gained backing from the AWE board, before being outgunned by Japanese giant Mitsui & Co. 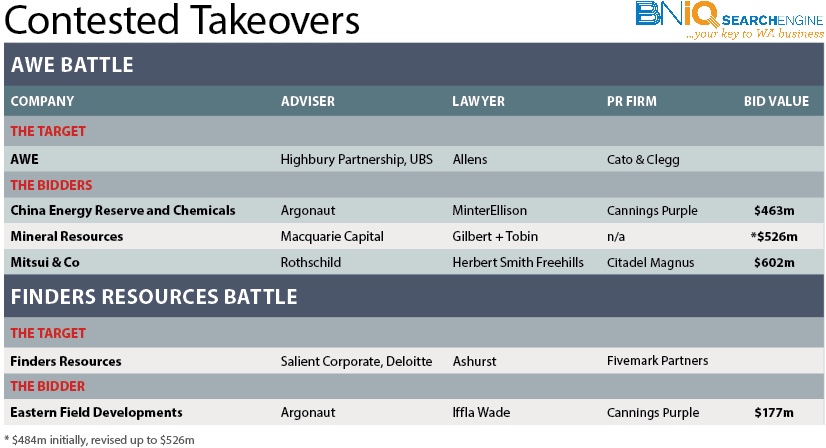 Mitsui, which was advised by Rothschild and Herbert Smith Freehills, looks set to win control of AWE after pitching its offer at 95 cents per share.

That’s a great outcome for AWE shareholders, whose stock had been languishing below 50 cents for most of last year.

Ironically, the low share price proved to be a big problem for the Chinese bidder.

“The greatest issue was the starting price was too low, and that reflected how poorly the company had been managed,” Mr Rigg told Business News.

He said state-owned Chinese groups had been spooked by earlier deals, in which they had paid far too much for Australian assets, and had been advised by others they should offer no more than a 35 to 50 per cent premium.

Mr Rigg said this would make sense if the share price was trading in line with intrinsic value, but that was not the case at AWE.

The Argonaut co-founder had also wanted to snap up a sizeable stake in AWE to increase its bargaining power.

“It was frustrating,” Mr Rigg said.

“Every step along the way we wanted to buy that initial 9.9 per cent.

“If we’d done that we would have won, or at least walked away with a big profit.”

Mr Rigg said the outcome would also have been different if the Chinese had lodged an offer before AWE undertook a placement in mid November.

“They should have acted earlier,” he said.

Argonaut had more success with another hotly contested takeover.

In this case, the key asset was the Wetar copper project in Indonesia, which was commissioned in 2016 after a major expansion.

In contrast to Waitsia’s drilling results, Wetar’s production failed to live up to expectations.

An unusual aspect of this takeover was that Eastern Field would have been a willing seller of its stake in Finders, for the right price.

In fact, Provident Capital Partners (part of the Eastern Field consortium) originally engaged Argonaut to sell its stake in Finders.

In the absence of any offers, it lodged a takeover last October at 23 cents per share.

The incumbent directors commissioned an independent experts report from Deloitte, which concluded fair value was between 31 cents and 35 cents.

“The directors kept on saying the offer was inadequate,” Mr Rigg said.

“We said if they attracted a higher offer, we would accept.”

“We remain convinced the independent expert’s report was wrong,” he said.

Mr Rigg said other shareholders in Finders had been assuming Eastern Field would lift its offer, as often occurred in takeovers.

“That was the challenging bit for us,” he said.

“We told them the company was in far worse shape than they thought.”

In the absence of any competing offers, most of Finders’ shareholders have recently accepted Eastern Field’s offer.

The latest twist in the takeover was the recent intervention of the Australian Securities and Investments Commission.

It is seeking orders from the Takeovers Panel, cancelling acceptances by Taurus Funds Management and two independent directors, who collectively hold a 12 per cent stake in Finders.

Asic wants to hold these shareholders to statements they would not accept an offer at 23 cents per share.

If Asic is successful, Eastern Field’s stake would drop below the compulsory acquisition threshold of 90 per cent.

Mr Rigg believes that is not a problem, as he expects Wetar will eventually be folded into an international float of Indonesian company Merdeka Copper Gold, which has overlapping ownership with Eastern Field.