There is little immediate prospect of the state government expanding its current $5 billion asset sales program, despite Premier Colin Barnett seeming to flirt with the possibility this week. 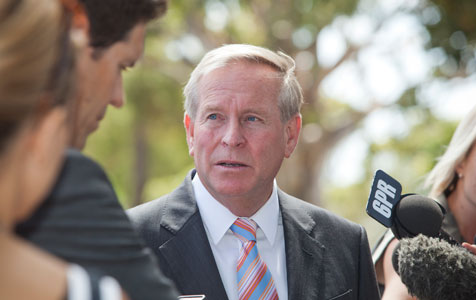 There is little immediate prospect of the state government expanding its current $5 billion asset sales program, despite Premier Colin Barnett seeming to flirt with the possibility this week.

A frustrated Mr Barnett shifted his rhetoric yesterday, when asked by journalists if the government would sell Western Power after Moody’s decision to cut Western Australia’s debt rating.

“I don’t support the sale of Western Power, however if we don’t get any correction in the GST situation and we continue to be penalised by the Commonwealth and the other states, then we will have to look at further asset sales,” Mr Barnett said.

When pressed on the possibility, he said WA was running out of options.

“We may be forced to consider that,” Mr Barnett added later.

Those comments marked a significant shift from the premier’s usual flat refusal to consider the sale of the state’s energy utilities.

His comments encouraged the Chamber of Commerce and Industry of WA to call for a speedy Western Power sale.

“It is vital the state government prioritises electricity asset sales to maximise returns for the tax payer,” she said.

Ms Willmott went further, saying the government should sell other utilities, including Synergy and the Water Corporation.

However, a close reading of the premier’s comments showed his continued lack of enthusiasm for asset sales.

He insisted, as he always does, that the real fiscal problem facing WA was its low share of GST grants.

“We could deal with the commodity price downturn by itself but we can’t deal with that and the GST issue,” Mr Barnett told journalists.

“We have no recourse but to sell the assets of Western Australia to try and make up the shortfall.”

The big question is whether the current asset sale program, expected to reap about $5 billion, will be sufficient to bring the state’s ballooning debt under control.

The government has already selected an industry consortium as preferred bidder for Market City at Canning Vale, and today appointed Gresham Partners to manage the sale of the Keystart loan book.

The premier said yesterday the planned asset sales would be adequate.

“At the moment we have a program of privatisations which will be sufficient to cap the level of debt,” Mr Barnett said.

He added he was reluctant and hesitant to sell Western Power.

Unusual for a modern conservative leader, Mr Barnett has an interventionist belief that state ownership of energy utilities is important because it provides the government with extra policy levers.

“I’m not going to let Western Australia get in that position.”

Mr Barnett also played down the magnitude of any financial windfall that may come from the sale of Western Power, which has more than $7 billion of debt on its books.

Mr Barnett made clear that nothing would happen before the next state election, due in March 2017.

To work out what happens after that, it’s useful to go back to Mr Barnett’s opening comment yesterday on Western Power.

He said WA would need to consider further asset sales “if we don’t get any correction in the GST situation and we continue to be penalised by the Commonwealth and the other states”.

The general expectation is that WA’s share of GST grants has bottomed out this year, when WA will get only 30 per cent of its population share of national GST revenue.

The collapse in iron ore royalties means WA is expected to get a higher share in coming years, though that money is certainly not yet in the bank.