Ten years ago this month, one of the state’s most debated infrastructure projects opened at the Australian Marine Complex in Henderson. Business News analyses its impact. 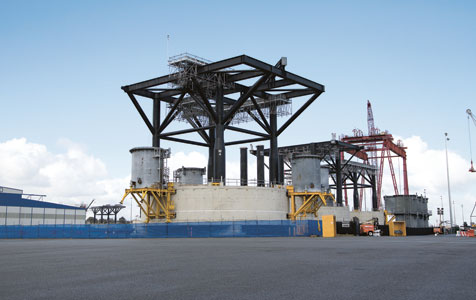 FABRICATION: Fifty-six giant concrete 'caissons' have been fabricated at the AMC. After being fitted with steel topsides, they are transported to Barrow Island where they will form the foundation for the Gorgon project's LNG jetty.

Ten years ago this month, one of the state's most debated infrastructure projects opened at the Australian Marine Complex in Henderson. Business News analyses its impact.

The headline numbers appear to tell a simple story – state and federal governments have invested $400 million in ‘common user’ infrastructure at the Australian Marine Complex.

In return, the common user facility (CUF) has brought in $1.5 billion worth of work on 368 projects, according to government estimates.

A tour of the AMC makes it abundantly clear just how busy it is.

Local contractor AGC has been one of the main beneficiaries, having completed about 15 projects at the facility.

Civmec has been another big winner, after building one of Australia’s largest undercover fabrication halls just 500 metres from the AMC wharves.

Defence contractors such as ASC and Babcock have also benefited, using a world-class floating dock to help them service navy submarines and frigates.

In addition, the AMC has become a major supply base for Chevron’s Gorgon project, helping it deal with the unique quarantine challenges on Barrow Island.

But not everyone is convinced.

AMC Business Owners Association chairman Ian Hamer believes most of the 150 businesses at the AMC have not benefited from the government’s big infrastructure spend.

“The CUF has benefited a handful of companies that have secured work on Chevron’s Gorgon project,” he said.

“Companies not involved in Gorgon though have not benefitted from the CUF.”

“AGC has got some benefits, but for the industry as a whole the experience has been mixed,” Mr England said.

“I don’t know if it’s actually helped us win steel fabrication work to any great extent.”

Development of the AMC had its genesis in the late 1980s, when there was a debate over the economic impact of the North West Shelf gas project.

The debate was signposted by the publication of two reports – ‘The North West Shelf: A sea of lost opportunities?’, followed by ‘A sea of indifference: Australian industry participation in the North West Shelf Project’.

This debate is a perennial, in Australia and elsewhere.

A landmark study published two years ago in the UK even borrowed its title from one of the Australian reports.

The ‘Sea of Lost Opportunity’ argues that Britain failed to fully take advantage of the North Sea oil boom.

Norway is often cited as a country that has done it better, with Stavanger growing to become a major base for oil and gas services companies.

Support for the AMC was galvanised by the challenges facing local suppliers on big resources projects.

A prime example was United Engineering, which won a big contract in 1997 to supply modules for Woodside’s Laminaria oil field development.

United fabricated the modules at its workshop in Kwinana but then had to transport them to a temporary site at North Fremantle for final assembly.

The AMC has a range of infrastructure specifically designed to help that kind of work.

It includes a protected deep water harbour, five wharves, including one with a 300-tonne crane, two fabrication halls, including one that measures 80 metres by 60 metres by 42 metres tall, and 50 hectares of sealed laydown and construction area.

Three years later, in 2006, the state invested a further $170 million, with the main development being the installation of what AMC Management, the private sector company that manages the CUF, calls “the world’s most technically advanced” floating dock.

A related investment was a 516-wheeled transporter, for moving submarines, frigates and other craft off the floating dock to anywhere within the facility.

Department of Commerce general manager marine and defence, John O’Hare, said the state government’s willingness to lift its investment was made easier by the initial signs of success.

“The state had comfort in the (business) model, it was starting to work,” Mr O’Hare said.

It involved the development of a service area and supply wharf that met the needs of the Gorgon gas project during its construction base.

Management of the AMC’s common user facility has been contracted out to private sector company AMC Management, which is led by four directors with broad experience in engineering and project management – Ivan Bristow, Grant Moffatt, Richard Clark and Michael Bailey.

The business had to create a new rulebook for the CUF because nothing of its type was in operation 10 years ago.

“There was nowhere in the world you could go to find a management manual for this type of facility,” Mr O’Hare said.

“Third-party management is a must. We have no vested interest in any of the projects, that is a critical component,” Mr Smith told Business News.

Mr Smith said running the entire facility on a common user basis, with no private assets, was also critical.

That has meant multiple projects – up to 15 on some occasions – have been able to use the facility at any one time.

“In the early days, that was hard for some of the larger companies to understand,” Mr Smith said.

“They are used to owning their own facilities.”

Mr O’Hare said the AMC was designed to complement rather than replicate what the private sector already had.

“We call it giving industry a virtual capacity expansion,” Mr O’Hare said. “It’s there when you need it.”

The structure that AMC Management put in place includes having a published schedule of rates, and operating on a ‘pay-per-use’ basis.

“Access is on a project-by-project basis, and you only pay for as long as the facility is used,” Mr Smith said.

As a dedicated industrial area, the CUF has no restrictions on light, noise or access, and is able to operate 24/7 every day of the year.

Mr O’Hare believes the directors of AMC have also played a very big part in the facility’s growth.

“The real key was their knowledge of WA industry, and knowing how this kind of facility could work in this market,” Mr O’Hare said.

Their strategy has included being adaptable to changing circumstances.

When the AMC opened, for instance, contractors were targeting gas-processing projects planned by companies such as GTL Resources and Dampier Nitrogen. They never got off the ground.

Usage of the floating dock has also been different from early expectations.

Principally it was designed for use by defence contractors working on the Collins class submarines and ANZAC frigates.

That work has eventuated, but in addition there has been a lot more commercial work, which previously would have been undertaken in Singapore.

Mr Hamer – whose group was established with support from Matrix Composites & Engineering, which is in dispute with LandCorp after saying land tenure issues have prohibited further expansion of its manufacturing facility at the AMC – is pushing for a change in the way the wider business park is managed.

“An AMC location has not enabled companies to compete with bigger businesses nor to improve local content opportunities,” Mr Hamer said.

“International best practice models, such as in Norway and Canada, need to be adopted locally.

“These jurisdictions have very successful sector-specific clustered industrial precincts which are driven forward by industry for the benefit of industry, but with government support.

“This is the type of model that needs to be implemented at the AMC.”

He is frustrated that big companies like GE Oil & Gas, Aker, Schlumberger and Cameron have set up Perth operations near Jandakot and Perth airports rather than at the AMC.

“There has been a fracturing rather than a clustering of oil and gas companies,” Mr Hamer said.

He is setting up a website called ‘AMC Connect’ to build links between businesses at the AMC and help them win new contracts.

AGC’s Mr Barlow said his business was not relying on government or any other third party to drive opportunities.

“I don’t think we can really compete with the Asian suppliers in putting those massive modules together,” he said.

“We need to focus on where we can add the most value.

“Areas like speciality spooling, speciality welding, taking components and putting the modules together, and all the small fabrication that goes with it.”

“We’ve spent a lot of time in the last couple of years in Houston and Yokohama and the UK, talking to Bechtel and the other engineering groups,” he said.

“I’m not going to rely on the government to do that.

“You can’t go through a third party, you need to go and sit in front of these international contractors and tell them what we can do.

“We tell them what we’ve done in this common user facility and they go away and think about how they build that into their project.

“It’s a world-class facility, we just need to use where it adds the most value.” 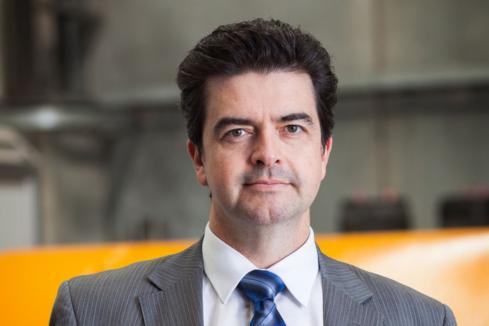