Automotive Holdings Group’s remuneration report should be read by all company directors wanting to learn about best practice. 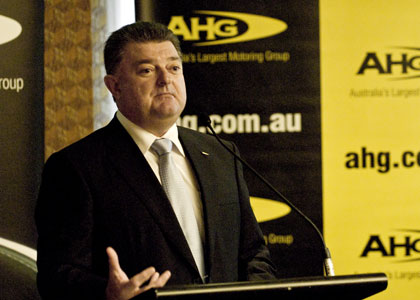 STALL: Bronte Howson’s base salary will be frozen for the third year running but he can still earn up to $3 million. Photo: Grant Currall

Automotive Holdings Group’s remuneration report should be read by all company directors wanting to learn about best practice.

One year ago, AHG’s board of directors got a bloodied nose at the company’s annual general meeting.

When shareholders were asked to formally adopt the 2011 remuneration report, 43 per cent of the votes cast were against.

Being greater than 25 per cent, the large negative vote constituted a ‘first strike’ under the Corporations Law and put AHG in the bad books.

The reasons for the large negative vote have never been clearly explained. It was interpreted at the time as a protest vote by the Wheatley family, which subsequently sold most of its AHG shares to competitor AP Eagers.

Whatever the reason, AHG’s board, led by chairman David Griffiths, engaged PricewaterhouseCoopers to review its remuneration policies.

The result is an unusually candid and detailed analysis of the company’s remuneration practices in this year’s annual report.

The disclosure extended as far as PwC’s fees and the ground rules for its engagement.

The accounting firm, which was paid $75,200 for its work, did not provide any other services to AHG and reported only to the chairman of the remuneration committee, leaving the board satisfied that PwC was not unduly influenced by any of the members of AHG’s management team.

In broad terms, AHG will continue to offer its senior executives remuneration packages that are similar to those at most other listed companies.

But, beyond this, there have been many changes. In particular, AHG’s board has agreed to change its incentive schemes, after it acknowledged feedback from shareholders and proxy advisers and getting advice from PwC.

Until now, it has paid large commissions and bonuses, reflecting its operations in auto sales.

In future, it will limit cash payouts by ‘requiting’ a portion of any incentive payments to be awarded in the form of equity, and will make it harder for executives to qualify for incentives.

Performance targets will be based on improvements against historical performance, rather than merely budget.

In addition, the ‘threshold’ (or minimum) performance targets will require an improvement on historical performance before any incentive payments are triggered.

The company will also reduce the portion of short-term incentives paid out for simply reaching the ‘threshold’ performance.

Another change will see the company re-weight its performance metrics to get a better balance between financial and non-financial goals.

AHG’s board has also decided, in light of PwC’s recommendations, that a greater portion of total remuneration for its executives should be subject to longer-term performance hurdles.

For the managing director and a small group of senior executives, their ability to earn equity-based ‘performance rights’ will be based on their performance over a three-year period.

The value of the performance rights will range from 25 to 50 per cent of their base salary, which AHG said was in line with current market practice.

The key performance metrics for the top executives will be two-fold: total shareholder return (TSR) relative to a peer group of 22 listed companies, and growth in earnings per share.

The performance metrics for these executives will be tied to their role.

Managing director Bronte Howson’s base salary will be frozen for the third year running, at $1.1 million.

This is not surprising, since he ranks as one of the best-paid chief executives in the state. Only 11 Western Australian-based chief executives had a higher base salary last year, according to WA Business News’ 2011 remuneration survey, and most of those people work for much larger and more profitable businesses.

Mr Howson will also retain the potential to match last year’s total income of $3 million, if he hits all of his new performance targets.

AHG’s remuneration report explains what the new targets are based on but the specifics are not disclosed, and never will be, at AHG or any other listed company.

That is where shareholders have to trust their boards, to ensure that ‘threshold’ targets are not a gimme and that ‘stretch’ targets really are a stretch.