Automotive Holdings Group has announced plans to purchase a refrigerated logistics business and an automotive dealership group at a combined cost of $184 million. 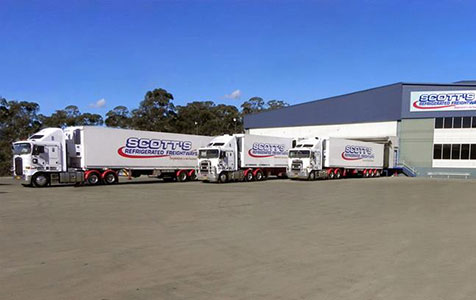 Automotive Holdings Group has announced plans to purchase a refrigerated logistics business and an automotive dealership group at a combined cost of $184 million.

AHG told the market it had entered into a binding agreement to acquire Sydney-based Scott's Refrigerated Freightways in a cash and scrip transaction worth $116 million.

The purchase price includes $71 million in cash, 4.3 million AHG shares and the assumption of about $30 million of finance leases.

The purchase of SRF would consolidate AHG's position as the largest provider of transport and cold storage operations in Australia, the company said.

As part of the deal, SRF will acquire the remaining interests in Cairns-based JAT Refrigerated Road Services that it does not already own.

Taking into account the JAT transaction, SRF is forecast to generate revenue of about $237 million and earnings before interest, tax, depreciation and amortisation of about $25 million in the 2014 financial year.

The existing SRF management team will continue to manage the business.

AHG has also entered into a heads of agreement to acquire Bradstreet Motor Group for $68 million in cash.

The group comprises 13 automotive dealerships located in and around Newcastle, New South Wales and represents seven manufacturers, including Toyota, Mazda and Holden.

The business generated revenue of $449 million and net profit before tax of $14 million in the 2013 financial year,

Mr Howson said the addition of the Bradstreet Group dealerships would complement AHG's established Newcastle truck hub, giving the company a strong presence in the region.

"This is a strategic addition to our NSW dealership network," he said.

"The dealerships operate from well-maintained properties on long-term leases and require no significant capital expenditure."

The acquisitions are expected to deliver an earnings per share boost of about 9 per cent on a pro forma basis in the 2014 financial year.

AHG will undertake a fully underwritten $115 million equity placement to institutional and sophisticated investors to fund the acquisitions.

The company will issue about 33 million new shares at $3.49 each, representing a 3 per cent discount to the last closing price, in a placement jointly lead managed by Bell Potter Securities and UBS.

AHG will also raise up to $10 million through a share purchase plan at the same issue price as the placement.

The balance of the transaction costs will be funded from existing cash and debt facilities, with the company taking on $45 million of additional debt facilities from its existing lenders.

AHG meanwhile said it was continuing discussions with potential buyers who had expressed an interest in acquiring the company's Covs retail stores in Western Australia.

It said these discussions remained preliminary and non-binding and there was no certainty any such transaction would proceed.

AHG shares remain in a trading halt and last traded at $3.60.