Automotive Holdings Group has posted a solid half-year result with profit and revenue up, driven mostly by the company’s retail business but offset by its logistics divisions. 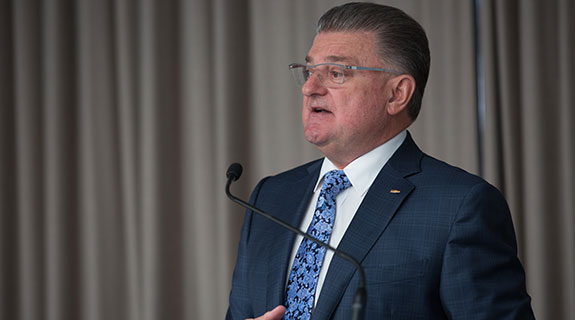 Automotive Holdings Group has posted a solid half-year result with profit and revenue up, driven mostly by the company’s retail business but offset by its logistics divisions.

Perth-based AHG reported a 7 per cent rise in net profit to $48.2 million for the six months to December, with revenue up 7.2 per cent to $2.75 billion.

The group’s earnings before interest, tax, depreciation and amortisation grew 10.9 per cent to $115.4 million compared to the previous corresponding period, while earnings per share rose to 15.7 cents.

AHG declared an increased interim dividend to 9.5 cents per share, up 0.5 cents.

Managing director Bronte Howson said it was a strong result driven by the outperformance of AHG’s automotive division and a strong focus on cost controls in its logistics operations.

“I think people generally are seeing that the world is not that bad of a place at the moment; sure we’ve got a few challenges and the unemployment rate is a little higher but there’s still plenty of people out there in jobs and we’re seeing that the car industry in the private sector is up,” Mr Howson said.

“We’ve also seen a strong first-half performance from the Bradstreet acquisition in Newcastle; secured a new Nissan franchise in Brisbane and completed the sale of the West Auckland Nissan and Perth’s three Mercedes-Benz dealerships.”

The results came two weeks after Business News reported the number of new cars sold in Western Australia had fallen 3 per cent in January, while nationally new car sales were up 2.7 per cent.

However Mr Howson said AHG had a strong used car retail portfolio, and while new and used car sales were strong on the east coast and New Zealand, Western Australia didn’t perform as well.

“WA didn’t get the volume but it certainly did well in the back-end in its service retention,” Mr Howson said.

He said the fall in activity in the state’s mining industry had hurt vehicle sales in northern WA, but it had also opened opportunities to pick up services work as other businesses left the area.

AHG’s automotive retail division posted a 10.3 per cent increase in revenue to $2.2 billion, while it’s refrigerated and other logistics division reported a drop in revenue.

“We’ve made significant progress in restructuring our logistics business,” Mr Howson said, adding there is further work to be done.

“But we remain confident in the future of those businesses.”

“An important part of Stephen’s role will be to drive the refrigerated logistics performance improvement program,” Mr Howson said.