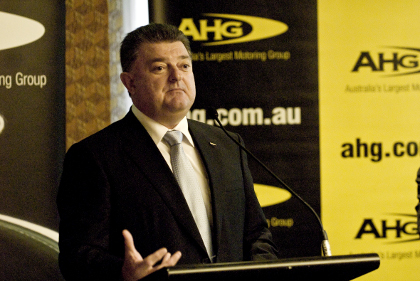 AHG said the acquisition was expected to bring in $75 million in annual revenue.

The sale does not include Toll’s cold storage warehouses in Perth, Sydney and Brisbane, but Rand will lease some of that space in the short-term.

About 100 Toll staff will transfer to AHG under the deal.

AHG managing director Bronte Howson said the transaction was a win-win for Rand and Toll Holdings’ customer base.

“For Rand, savings can be made by improved utilisation of its existing cold storage facilities and transport services,” Mr Howson said in a statement.

“Toll Refrigerated’s existing customers will benefit from being part of a significantly larger refrigerated business with a quality reputation in the market.”

The sale of Toll Refrigerated came about after a strategic review of Toll Holdings’ operations, managing director Brian Kruger said.

"Due to the challenging market conditions and margin pressure faced by this business, we concluded that, in this case, divestment was the best option,” Mr Kruger said in a statement.

The sale includes Suzuki and Mitsubishi dealers at Helensvale, Suzuki, Mitsubishi and Peugeot dealerships at Southport and a service centre at Burleigh.

Mr Howson said the sale was part of the group’s restructure of its Queensland operations, and would allow managing to focus on its Brisbane dealerships.