The game between Adelaide Crows and Geelong this weekend has been called off, but other AFL games will proceed, after Crows coach Phil Walsh was found dead in his home early this morning. 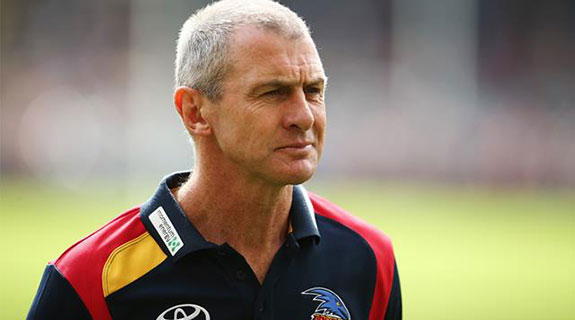 Phil Walsh has been murdered in his Adelaide home. Image courtesy of Channel Nine.

The game between Adelaide Crows and Geelong this weekend has been called off, but other AFL games will proceed, after Crows coach Phil Walsh was found dead in his home early this morning.

The 55 year old died from multiple stab wounds at his house in Somerton Park in Adelaide at 2am EST, with his son arrested after police were called to a domestic dispute.

Mr Walsh’s wife was also injured in the attack, and remains in hospital with non life-threatening injuries to her leg.

The son was taken to Flinders Medical Centre for a psychiatric assessment, under police surveillance.

SA Police superintendent Des Bray said the son, who normally resides at the house, was out during the night and returned home around 2am, when an argument began.

“I can’t tell you anything about the argument or the circumstances of that, but as a result of that both Mr Walsh and his wife received the wounds and the wounds ultimately caused Mr Walsh’s death,” he said.

“For the family, regardless of who it is, is one of the worst things that you could imagine that could happen to you.”

The scheduled game between the Crows and Geelong on Sunday has been cancelled, with both teams taking equal points as per AFL rules.

“We send our love and support to the Walsh family, the Crows staff and players, Phil’s wider circle of friends, the other clubs he worked with, and his many colleagues across the AFL,” Mr McLachlan said.

“Phil Walsh was a man of boundless energy and enthusiasm, and his death is a tragic loss.

“At this time, the AFL is working closely with the Adelaide Football Club on the support required to the staff and players of the Crows.”

Mr Walsh played 122 games for Collingwood, Richmond and the Brisbane Bears between 1983 and 1990.

He was assistant coach at Port Adelaide in 1999, and helped take the club to a premiership in 2004.

He then moved to Perth where he became assistant coach of West Coast in 2009 before returning to Port in 2014.

He replaced Brenton Sanderson as the Crows’ head coach in the 2014 off-season, and coached them for 12 games.

West Coast chief executive Trevor Nisbett said the club was numbed by the news this morning that Mr Walsh had been murdered.

“It was both surreal and devastating to wake up to the news of Phil’s death this morning and it is difficult to process,” he said.

“Phil made an outstanding contribution to our club and was an important part of the West Coast family.

“We offer our deepest condolences to Phil’s wife, Meredith, and to all those dear to him at this tragic time."