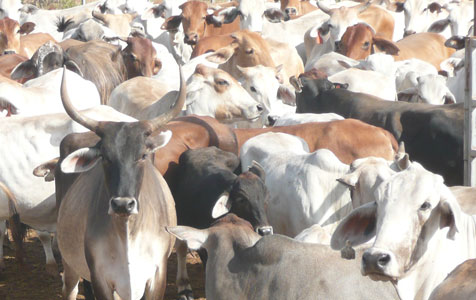 The Australian Agricultural Company has announced a $46.5 million loss for the three months to March 31 2013, after being hit by the continuing effect of government bans on live exports.

The loss for Australia’s largest beef cattle producer was largely due to a massive $43.2 million write-down of the market value of the company’s 676,000 head of cattle due to a slump in domestic cattle prices.

AACo said rainfall levels were well below average on its northern Australian properties, lower even than the 2007 drought.

The company said this negatively affected its operations by increasing the need to use feed, which added to water and transport costs during the three-month period.

Mr Farley said changes in livestock values could have a large impact on the company, with a 10-cent change in liveweight-per-kilogram prices having an $8.7 million effect on AACo’s pre-tax profit.

The $46.5 million loss compares to a $5.1 million loss suffered by the AACo during the same period in 2012, and comes despite increased revenue of $61.1 million, compared to $43.2 million in the March quarter last year.

AACo was quick to point out, however, that $35.3 million of the $43.2 million write-down was for long lifecycle breeding cows and young grower cattle not for immediate or near-term sale.

Accordingly, AACo said “this write-down is a non-cash valuation not expected to be realised in the short term”.

This does, however, mean a $7.9 million write-down in value for the company’s trading herd of cattle for sale.

Despite the difficulties, Mr Farley said AACo had managed to increase both cattle sales and wholesale beef revenue during the quarter, selling 41,186 cattle, up from 29,646 from the same period last year.

The average price for cattle for the quarter was $980/head, down from the corresponding quarter’s figure of $1,255/head.

Mr Farley added that the domestic cattle price slump was at odds with continuing high global beef prices, and the disparity validated AACo’s decision to build a Darwin abattoir to capture global prices.

He said the company’s planned Darwin abattoir “will open up new channels to the market as well as reducing freight costs currently incurred by moving cattle from the north to eastern Australian abattoirs”.

AACo’s planned Darwin abattoir will be the first major beef processing facility in northern Australia, and according to the company will both insulate it from domestic price movements and live export fluctuations as well as reduce transport and freight costs for northern producers.