A tale of two professions

The top end of the accounting profession in Western Australia has nearly doubled in size over the past decade, whereas the state’s major law firms have recorded minimal growth, according to employment data compiled by Business News. 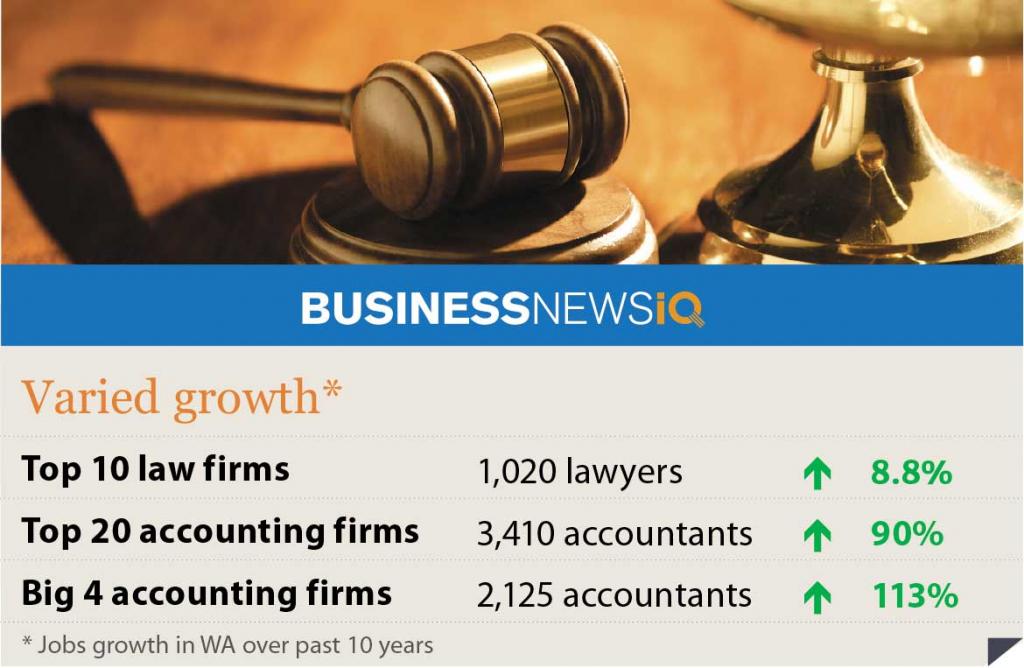 The top end of the accounting profession in Western Australia has nearly doubled in size over the past decade, whereas the state’s major law firms have recorded minimal growth, according to employment data compiled by Business News.

However, the strong growth of the WA economy has not led to commensurate growth in the big law firms.

The top 10 law firms in WA collectively employ 1,020 legal professionals – up just 8.8 per cent over the past decade.

The squeeze on the law firms is even clearer when measured by total employment; the top 10 firms collectively employ 1,656 staff, up just 2.1 per cent over the decade.

Clayton Utz partner Paul Fitzpatrick said he was not surprised by the small growth in the top 10 law firms.

He believes one of the main reasons is the increased number of in-house solicitors.

“My impression is that there has been significant growth in those numbers. As a result, a lot of work that would have previously been done by external firms is being done in-house,” Mr Fitzpatrick said.

He said another factor was that the top firms were no longer working in practice areas such as plaintiff personal injuries, residential conveyancing and leasing, and probate.

Outsourcing has also affected the growth of the big firms.

“In some practice areas, such as litigation, parts of the work, like discovery, are being sent out to low price firms or overseas to low cost jurisdictions,” Mr Fitzpatrick said.

Ashurst partner and head of Perth office Adrian Chai said the differences between the professions existed both in Australia and internationally.

He said international law firms such as Ashurst focused on very specific types of high-level legal work for their clients, whereas the accountancy firms offered a much wider and an increasingly varied range of services to a broadening client base.

“Lawyers are also far more constrained by professional rules about duties and conflicts, which means they do not enjoy the same freedoms that the accountancy firms do in servicing existing or new clients,” Mr Chai said

PwC managing partner Justin Carroll agreed that accounting firms now offered much more than when he joined the profession.

“There has been a general increase in the breadth of services offered,” he said.

“A lot of the growth that we’ve seen has been in our consulting practice.

“We compete with the McKinseys and the Bains and the BCGs.”

The BNiQ data shows that the ‘big 4’ accounting firms have dominated the sector’s expansion.

Collectively, they now employ 2,125 accountants – up 113 per cent over the past decade.

Growth among the big 4 has been highly variable, with market leader EY recording the slowest growth over the past decade (up 58 per cent) and Deloitte, which used to be the smallest of the Big 4, achieving the fastest growth (up 145 per cent).