Perth’s office market continues to show signs of recovery, amid the threat of lockdowns and a shift to WFH. 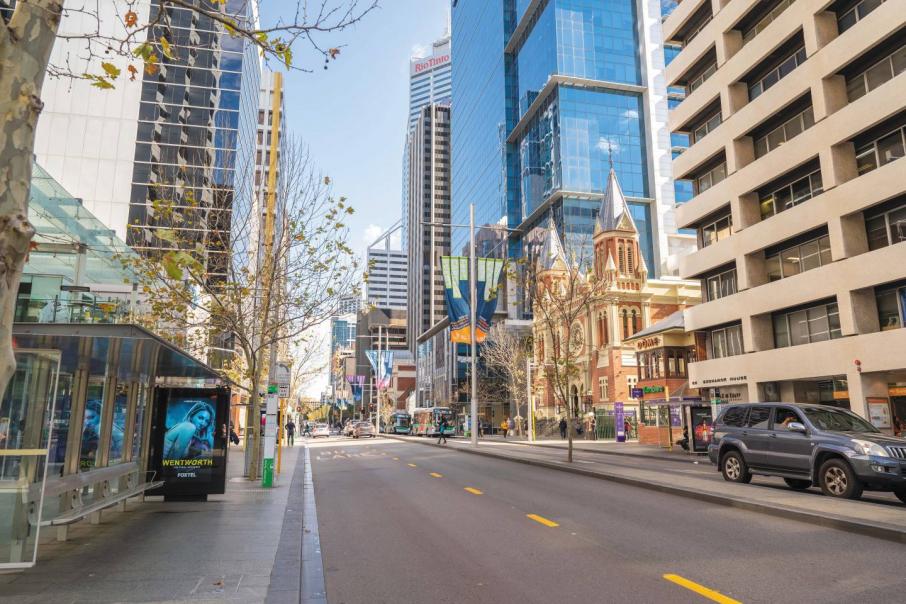 The Perth CBD office vacancy rate fell by about 3 per cent between January and July 2021. Photo: David Henry

Perth’s office market continues to show signs of recovery, amid the threat of lockdowns and a shift to WFH.

Both the Perth CBD and West Perth office markets recorded a drop in vacancy rates in the six months to July 2021, according to the Property Council of Australia’s latest report.

The Perth CBD office vacancy rate fell from 19.9 per cent at the beginning of this year to 16.8 per cent in July.

West Perth also achieved similar results, with its vacancy rate falling by 3 per cent to 19.1 per cent.

Presenting the results at a recent event to launch the report, CBRE associate director office and leasing, James Phelan, acknowledged both markets still had the highest rate of empty offices across Australia.

However, they were top performers in the contraction of vacancies during the past six months.

Perth and West Perth were also among only a handful of Australian office markets to record any reduction in vacancies (see graph). 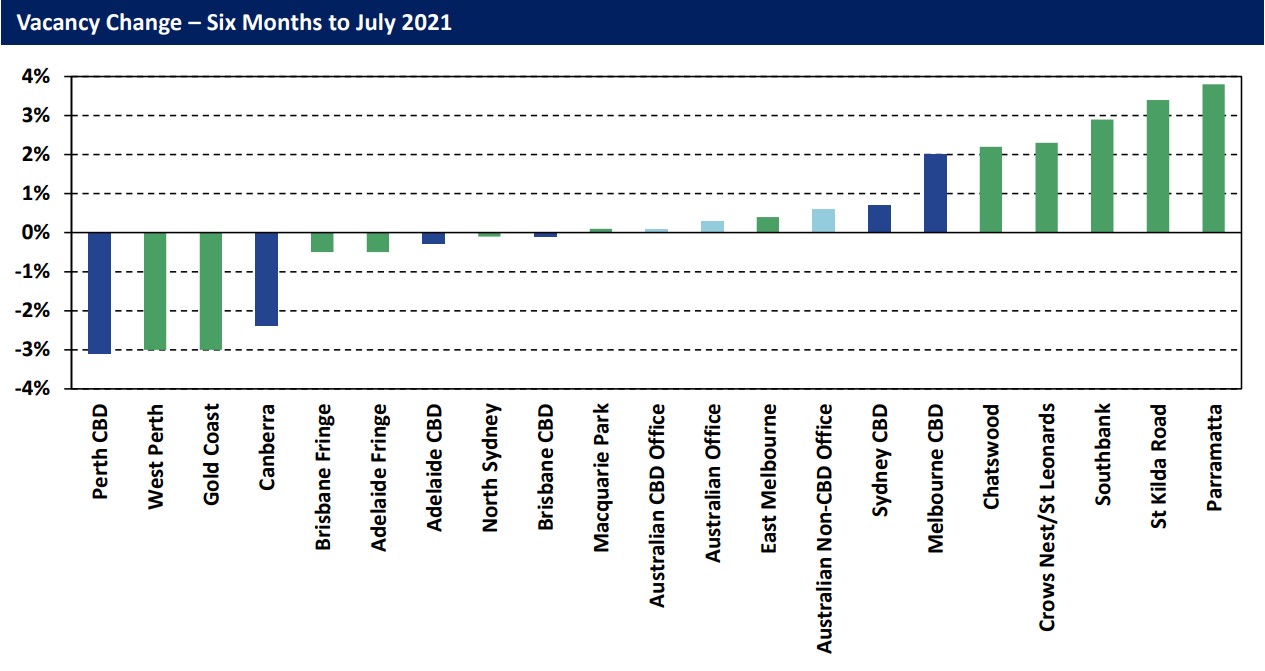 “The Perth CBD office market is now the fastest moving market in the country,” Mr Phelan told the forum.

“It’s clearly been a turbulent time for office markets nationally, but for Perth there’s definitely light at the end of the tunnel.

“The pandemic and continuous lockdowns have had an adverse effect on markets over east … but the Perth market is intrinsically linked with mining.

“When the mining sector starts to hum the demand for the Perth [office] market starts to follow, and that’s exactly what we’ve seen in the past six months: strong demand coming through from resources, mining, engineering and construction.

“And while we still have the highest CBD vacancy rate in the country, we have to remember Perth is a smaller and more volatile market and it also has the highest proportion of C- and D-grade stock in the country.

“So, it’s always likely to be artificially higher than more mature markets like Sydney and Melbourne.”

The withdrawal of office space from the market accounted for the bulk of the drop in Perth CBD vacancies, Mr Phelan said, but it was also important to highlight the significant amount of positive net absorption driven by tenant demand.

Withdrawals of office space for renovation or upgrade work accounted for 55 per cent (33,704 square metres) of the drop in vacancies, with an additional 13 per cent (7,662sqm) of space permanently withdrawn from the market.

Meanwhile, tenant demand was responsible for the absorption of 19,697sqm of CBD office space over the six-month period, representing 32 per cent of total vacancy reduction, which Mr Phelan said was about 2.5 times the long-term average absorption rate.

“It doesn’t take much to move the dial in Perth and get the market back working in landlords’ favour,” he said.

“Another demonstration of the resilience of our market is the sublease story, and this has been in complete contrast to what’s happening over east.

“During the COVID period we were very concerned we were going to see a lot of sublease space in the market, and this just never materialised.”

Melbourne and Sydney CBD markets recorded the largest volumes of office sublease vacancy over the period, with Melbourne’s 120,000sqm of empty sublease space six times the volume of that in Perth.

Mr Phelan said tenants moving into the CBD from the suburbs had underpinned demand for Perth’s office spaces, followed by businesses seeking to upgrade their space, with enquiries for floorplates over 1,000sqm up 56 per cent.

The Perth CBD market had achieved more than 70 leasing deals since January 2020, he said, underpinned by tenants looking to expand.

The largest of these included law firm Herbert Smith Freehills’ move to join Chevron at One The Esplanade at Elizabeth Quay, now under construction.

Fortescue Metals Group’s expansion was another large deal for the period, securing about 3,000sqm close to its existing headquarters in East Perth.

“The large corporates, after sitting on their hands for 12 months, have come back to market,” Mr Phelan said.

“We’ve also seen some major project space requirements … this is the first time we’ve seen this for nearly 10 years.

“As you’d expect, the majority of this is mining, engineering, or resources, and on the contraction side it was legal and professional services.

“We think incentives will start to fall marginally … and rents will start to grow later this year. We should see effective growth between 10 and 15 per cent by the end of 2023.”

That lure of increased rents backed by improved tenant demand appears to have enticed investors back to the office market.

More than $951 million worth of Perth office assets have sold so far for the 2021 calendar year, according to CBRE’s latest report, trending close to the pre-pandemic, five-year high of $1.2 billion (achieved in 2019).

Perth prime office market yields were also attracting investors, sitting at 6.27 per cent last June, compared to 4.59 per cent in Sydney and 4.74 per cent in Melbourne.

Recent deals include Dexus’s $339 million play for a 49 per cent equity stake in Capital Square Tower 1 in the Perth CBD. The first sizeable office deal struck in 2021 was Redhill Partners’ acquisition of Dynons Plaza on 899-927 Hay Street for $67.8 million.

The move was a massive vote of confidence in the Perth market, considering the 14-storey tower was vacant upon settlement, space then withdrawn from the market shortly after for refurbishment.

Redhill Partners investment manager Daniel Johnston said internal upgrade works were on track and he anticipated a tenant would be welcomed in early 2022.

“We believe the office is still required for companies to provide an area for collaboration and structure and believe having a blank canvas allows us to adapt to post-COVID trends.”

Mr Johnston said the group had experienced positive results across its Perth portfolio in 2021, with 45 St Georges Terrace now 100 per cent leased and 28 The Esplanade close to 90 per cent occupied.

Redhill was continuing to look at opportunities to grow its Perth and east coast office portfolio, he said.

“The big determining factor in years to come will be what developments come out of the ground,” Mr Johnston said.

“With construction rates on the rise and only a handful of tenants large enough for a pre-commitment, we believe these will still be a couple of years away from getting out of the ground.”

CBRE anticipates most of that future supply will come online post 2025, with 10 new office buildings mooted for development (see graph). 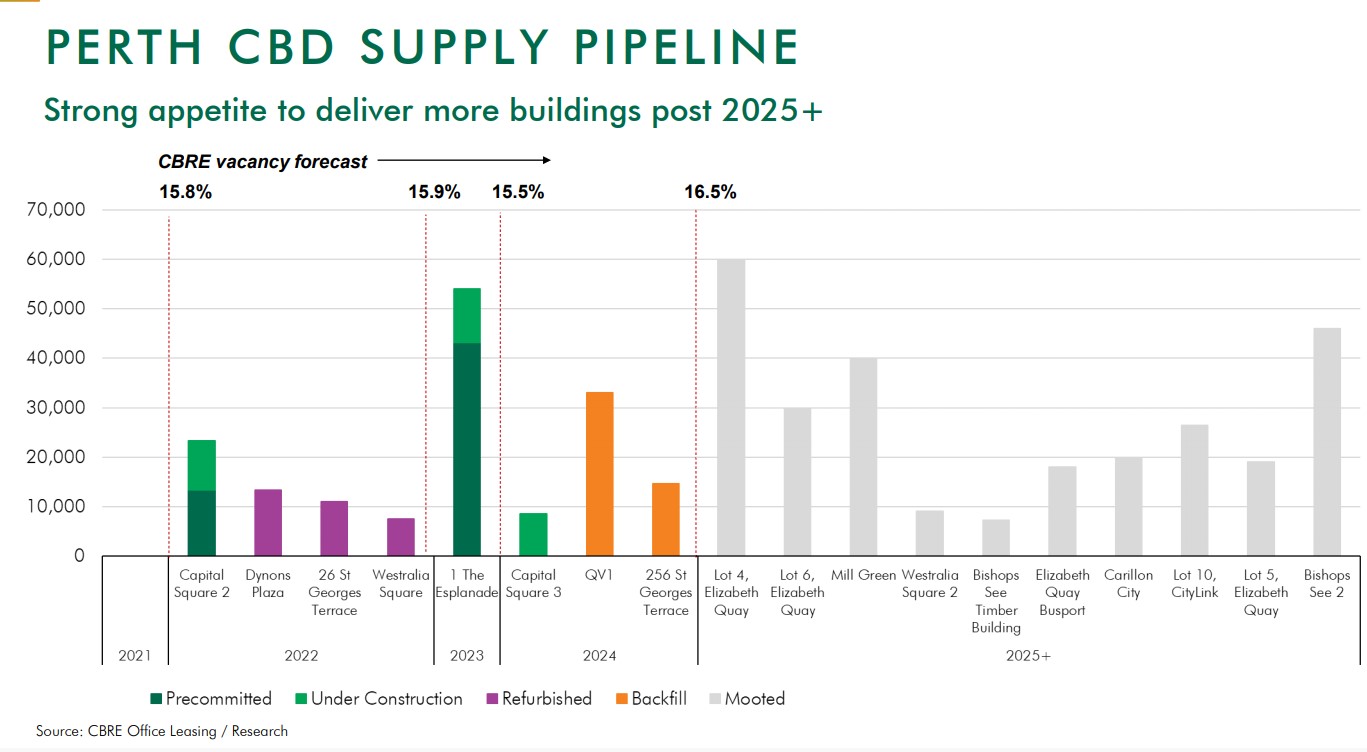 But those weren’t likely to break ground until tenant pre-commitments were secured, Mr Phelan said.

“We’ve looked at this very closely and taken into account all the variables: supply, demand, withdrawals, and tenant backfill,” he said.

“The Perth office market has performed well – there’s no doubt about that – and relative to what’s happening nationally, it’s been pretty outstanding.”