Final design works and construction valuations are under way for the long-awaited $70 million DoubleTree by Hilton hotel in Karratha, with building expected to begin before the middle of the year, albeit at a new location, in the Pilbara town’s CBD. 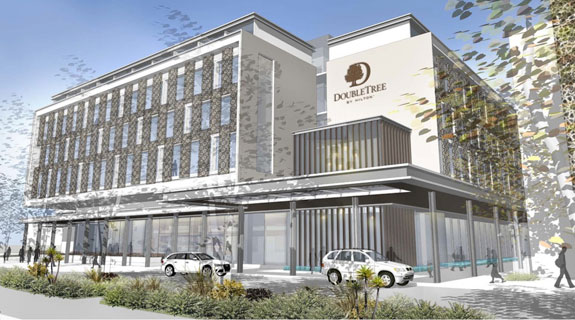 NEW SITE: The Karratha DoubleTree by Hilton is set to go ahead.

Final design works and construction valuations are under way for the long-awaited $70 million DoubleTree by Hilton hotel in Karratha, with building expected to begin before the middle of the year, albeit at a new location, in the Pilbara town’s CBD.

The five-storey hotel, comprising 152 guestrooms and 23 serviced apartments, will be built on a 4,650 square metre site on the corner of Warambie Road and Sharpe Avenue, across the street from Finbar Group’s Pelago apartments development.

Part of the capital required for the project – about $5 million – was sourced from Singaporean investors, through Perth-based financial services and development firm Griffin Group.

The hotel’s developer, Ramtron Australia, has sourced the remainder of the funds.

Griffin Group will pay $6 million for a 60 per cent stake in Ramtron, pending receipt of a small amount of outstanding funds already committed by Singaporean investors.

The hotel plan was first announced midway through 2012, with a scheduled 2014 opening, on a different development site on nearby Balmoral Road.

However, LandCorp released land closer to the town centre at The Quarter following the announcement of the hotel, and the consortium subsequently was successful in a bid to relocate the project.

Griffin Group manager Greg Devine said while the new location required significant re-working of the design, he believed it would provide a superior outcome.

“It’s a better location from a layout point of view, which allowed for all of the things that Hilton would want, which is convention facilities for weddings, pools, serviced apartments, hotel rooms and all of the back of house requirements as well,” Mr Devine said.

“I think it’s a much better project now.”

He said the hotel would be constructed using a modular building method, with fabrication of the units to occur in China, by CIMC Group, which would also appoint a builder later this year.

The modular method is intended to lower the initial cost, while reducing the construction timeframe to around 12 months.

“CIMC have built 20,000-plus dongas, but they can also deliver a magnificent hotel in a modular format, which is done, packaged and complete, right down to TV, linen and everything else,” Mr Devine said.

The hotel will be part of LandCorp’s $132 million The Quarter project, the first stage of which is being built by Doric.

The first stage comprises a four-storey retail and commercial building, a decked car park, a new public square, and 46 apartments for service workers, as well as cafes, restaurants and other shops.