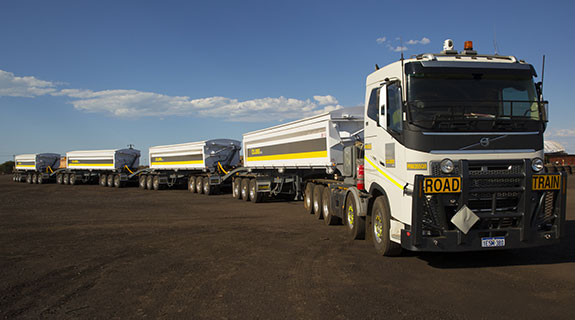 Local manufacturers Bruce Rock Engineering and Howard Porter will be hoping for a business boost after the state government approved a trial of ‘super quad’ road trains that were assembled in their WA workshops.

The super quads are longer than any seen on Australian roads before.

They comprise a prime mover and four trailers spanning 60 metres and carrying loads up to 140 tonnes, compared with conventional quads that are 53.5 metres in length and carry up to 114t payloads.

The three-month trial will be on one of the busiest roads in regional Western Australia – the Great Northern Highway between the Munjina-Roy Hill road and the Utah Point berth at Port Hedland.

This section of road carries about 200,000 truck trips per year, mainly hauling iron ore and manganese for mid-tier miners.

Mr Verhoogt said the super quads could not only save on costs for clients but reduce truck movements by up to 20 per cent.

As well as Wodgina, Qube plans to use the super quads at Consolidated Minerals’ Woodie Woodie manganese mine and Atlas Iron’s Abydos operation.

Transport Minister Dean Nalder said in a statement the road trains would be limited to 90km/h, to allow easier overtaking by other vehicles and ensure superior on-road performance.

“Even though they are longer, these are state-of-the-art vehicles with improved safety and superior handling compared to the standard 53.5m road trains, the longest currently allowed on our roads,” he said.

The trial will assess impact on the road infrastructure and other road users.

They will be assessed by a panel of the Road Safety Commission, local government, WA Police, Main Roads WA and the caravanning industry.