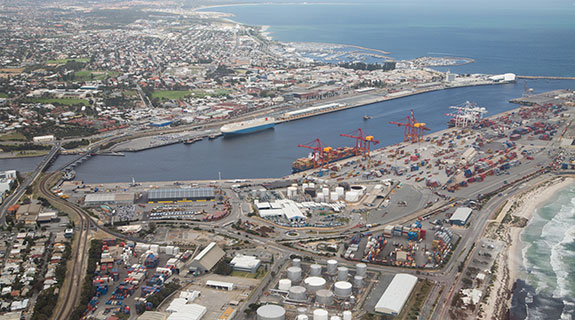 Fremantle Ports is being considered for sale.

This adds to the handful of assets currently up for sale, notably the Utah Point bulk terminal at Port Hedland and Perth Market Authority at Canning Vale.

Treasurer Mike Nahan said $3 billion to $5 billion was a conservative estimate of proceeds from the new sales.

The biggest item will be Fremantle Ports, which will be sold through a long-term lease, most likely of 49 years.

The sale will include the Kwinana Bulk Terminal, which the government has been attempting to sell on its own.

The port will be worth more than $2 billion if the Fremantle facility attracts the same earnings multiples that applied to port sales on the east coast, such as Newcastle, Port Botany and Port Kembla.

Those sales were at an earnings multiple of 25 to 28 times, and Fremantle Ports reported EBITDA of $82 million last financial year.

Dr Nahan said the sale would include rights to develop an ‘outer harbour’ at Cockburn Sound, which would occur in between 10 and 15 years when the existing ‘inner harbour’ at Fremantle reached capacity.

The outer harbour would require an investment of “easily $2 billion to $4 billion” but Dr Nahan believes it will add to the sale price.

“The right to build, own and operate an overflow port is an extremely valuable asset, it will enhance the value, not detract from it,” he said.

Dr Nahan acknowledged the extra asset sales were in response to the state’s weakened financial position.

“You react to the situation,” he told journalists.

“Our debt levels have increased to levels we are not comfortable with, and therefore the way to reduce our debt levels is through recycling assets, selling assets, more aggressively than we would otherwise do.”

He insisted it was not in response to the extra $500 million in federal funding announced last week.

Dr Nahan noted that the ports at Melbourne and Darwin were currently up for sale.

Once completed, that would leave Fremantle as the last urban container port still in government hands.

The Melbourne sale process is under review, which opens the possibility that Fremantle could come to market first.

Dr Nahan said the government would look to package-up land at Cockburn Sound, including some held by LandCorp and Synergy, to facilitate the outer harbour development.

Other assets for sale include the TAB, the Forest Products Commission’s softwood plantations, the government’s fleet of 11,000 vehicles, and some of its regional housing assets.

It is also looking to sell selected office buildings on a sale and leaseback basis, and some of LandCorp’s residential estates, including at Alkimos.

It will also securitise some of Keystart’s higher quality housing loans.

Energy assets to be sold include the Mumbida wind farm and the Greenough solar farm, which Dr Nahan said could be sold for “maybe $100 million”.

The details and timing of the sales are yet to be finalised.

Dr Nahan did not offer any guidance on the value of the TAB, though it is believed to be substantially less than $1 billion.

“We will sell the TAB by ensuring we have the support of the industry,” he said.

“If the industry is left with a guarantee of being at least as well of, and there is some money to refresh their ageing capital, they are open at least to extensive discussion of this.”

He said investors would take a 20 to 30-year view.

Usage of the facility is under doubt because of issues facing its major customer, iron ore miner Atlas Iron.

Dr Nahan said there had been good progress on the planned sale of the Perth Market Authority.