THE company behind the redevelopment of the old Swanbourne Hospital site says it will review its position following the State Administrative Tribunal's decision to back the City of Nedlands' rejection of the proposal. 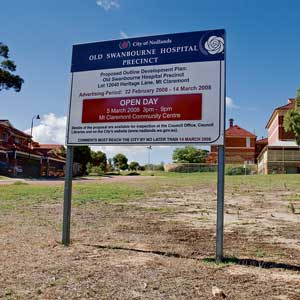 THE company behind the redevelopment of the old Swanbourne Hospital site says it will review its position following the State Administrative Tribunal's decision to back the City of Nedlands' rejection of the proposal.

The $50 million Montgomery Residences project, by Osborne Park-based Watersun Property Group, involved the conversion of most of the heritage building into 34 residential apartments and 16 grouped residences within the former hospital buildings.

The tribunal determined that the proposal warranted refusal, saying, "The demolition of substantial buildings with considerable heritage significance...is not generally in accordance with a development plan referred to in the local planning scheme."

It added that the proposed building exceeds the maximum building height prescribed by the scheme, suggesting a three-level contemporary building could be accommodated centrally within the site.

The decision followed a two-year consultation and engagement process with the City of Nedlands, The Heritage Council of Western Australia, local residents and key stakeholders.

Watersun development manager Terry Pilbeam said the decision would significantly affect the dynamics of the development.

"We are extremely frustrated and disappointed by this announcement," Mr Pilbeam said.

"Restoration of an historic building in isolation is an extremely expensive exercise and, therefore, is often supported by a commercial component to the site which contributes to making the entire project financially viable."

He said limiting the height of the new apartment buildings would have a directly negative impact on the overall viability of the project.

"Time is running out for the building, which was mothballed more than two decades ago and has not received any major maintenance or extensive upgrades since 1994," Mr Pilbeam said.

"A number of items it has referred to the tribunal most have been decided in favour of the way the heritage council was thinking," Mr Carrick told WA Business News.

He said redevelopments of heritage sites were often less complicated than people thought, but such decisions were more emotionally charged than traditional developments.

Earlier this month, it was claimed that the state government had launched a bid to have the old East Perth power station put back on the heritage register.

The East Perth power station had previously been on the heritage register, but a change of ownership from Western Power to Verve Energy required it to be re-registered within a 12-month period. That 12 months elapsed without registration, and was only recently brought to the attention of the council, which is now looking at a conservation order in the interim.

That would still allow a museum redevelopment, in keeping with the station's values. But that project seems unlikely to proceed, more so due to the current economic climate than any heritage issues.

The Department of Housing and Works has slated a number of heritage sites for redevelopment.

They include the Old Treasury Building in the Perth CBD, with a proposed mixed-use redevelopment to include a high-class hotel and new multi-storey office block.

The government announced a shortlist of developers for the site late last year - Mirvac/CBUS Property and Saracen - but has not moved on the plans since, prompting speculation the project may be put on hold because of the global financial crisis.

The government is also re-examining possible future uses for the former Sunset Hospital site in Dalkeith.

Late last year, the University of Western Australia ended three years of negotiation with the state government over its proposal to build a $30 million museum to house its indigenous arts collection at the hospital site.

Plans for a high-class aged residential facility for the site also fell through.