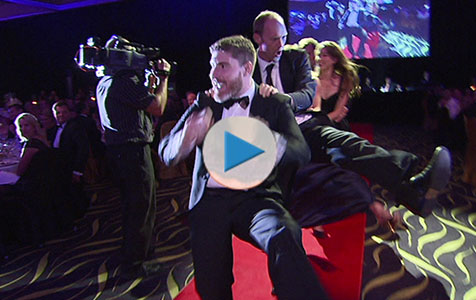 See the winners dance down the red carpet (video below)

Nearly 1,000 guests attended the 2013 40under40 awards presentation at Crown last month, making it the biggest night in the awards program’s 12-year history.

The big winner on the night was Northern Star Resources chief executive Bill Beament, who was selected as First Amongst Equals.

Other winners that were short-listed for this award included Tox Free Solutions’ Steve Gostlow and Barrick Gold’s Julie Shuttleworth, who last month was named the Chamber of Minerals & Energy’s Women in Resources Champion.

Illustrating the diversity of the awards program, another winner short-listed for First Amongst Equals was Bali bombing survivor and WA Institute of Martial Arts founder Phil Britten.

Many of the 40 winners took up MC Tina Altieri’s invitation to literally dance down the red carpet on their way to accepting their awards, adding fun to the night’s entertainment.

One of the happiest winners was Aussie Orientation Services managing director Sue Pember, who won the People’s Choice award.

The winners of the strategic partner awards were Buru Energy’s Tom Streitberg (for the City of Perth award) and management consultant Anna Dartnell of The Lonsdale Group (University of Western Australia award).

Subscribers who want to see more photos from the night or watch a video of winners dancing down the red carpet can go to 40under40.com.au.