John van Bockxmeer has been named a 40under40 finalist for his commitment to creating healthier WA communities. He has also been recognised with the Inspiring Possibilities award. 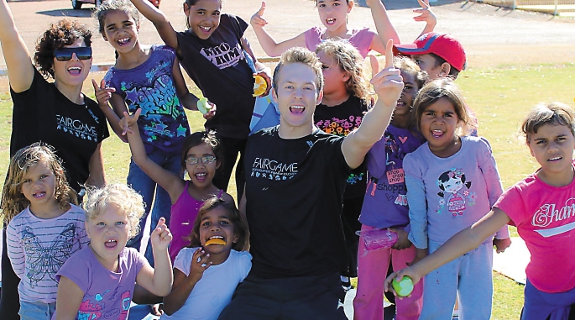 HAPPY: John van Bockxmeer enjoys the variety his community health and wellness work adds to his job as a rural emergency doctor in the Pilbara.

John van Bockxmeer won a 40under40 award and was selected as a finalist for First Amongst Equals for his commitment to creating healthier WA communities. He has also been recognised with the Inspiring Possibilities award.

As a young doctor with an interest in community health, John van Bockxmeer had occasionally considered recycling sports equipment for use in underserviced communities; but it wasn’t until he saw a group of Pilbara kids consigned to kicking a can around for fun that he decided something had to be done.

Today, the charity he chairs has facilitated the donation of more than 20,000 sports items (from exercise equipment to balls and bats) and counts almost 200 volunteers among its team of ‘Fair Gamers’.

Small groups of Fair Gamers head out on road trips 30 to 40 times a year, visiting young people across the state in the remote and culturally and linguistically diverse (CALD) communities where they live.

For his commitment to creating healthier WA communities, Dr van Bockxmeer has been named a 40under40 finalist for 2016. He has also been recognised for pursuing his own ‘impossible’, receiving the Inspiring Possibilities award sponsored by the University of Western Australia.

Dr van Bockxmeer divides his time between his full-time job as a rural emergency doctor based in the Pilbara with regular stints back in Perth and the several hours each day he spends running Fair Game.

He told Business News the separate endeavours offered him unique opportunities and a variety he might not otherwise enjoy.

“It’s almost a form of creativity that maybe in traditional medicine we don’t have. I’m quite motivated by the idea that this is an organic piece and I’ve started something from nothing, and there’s all these people with a fantastic culture (involved); that’s motivated me to keep going with it.”

The need for sustainability at the charity, which remains heavily reliant on Dr van Bockxmeer, has led him to develop a Fair Game succession plan, which will involve hiring the charity’s first full-time paid manager.

Dr van Bockxmeer told Business News working in the Pilbara and Kimberley would continue to shape the choices he made in his medical career and the activities he led to create healthier WA communities.

“I’ve gained an awareness of what life is like for people living outside the capital cities. Ultimately I changed my specialty from emergency medicine, which is quite city based, to rural emergency medicine and I think Fair Game’s played a large (part) in that,” he said.

“Being out in remote communities and ... seeing the landscape, hearing the things around you and experiencing that groundedness of being in an area of Australia that’s so ancient and not many people can experience makes you appreciate it.

“We never intended Fair Game to have the result of improving cultural awareness and reconciliation but I think it has, even within ourselves.

“I suppose it’s this reciprocal relationship. We’re giving of ourselves but we’re also receiving and it’s actually very powerful, because I look back on the years and I think about all the people I’ve met and the amazing stories I’ve had – it’s quite fulfilling.”