The City of Perth is poised to give the green light to plans for a $280 million, 40-level luxury hotel development in East Perth. 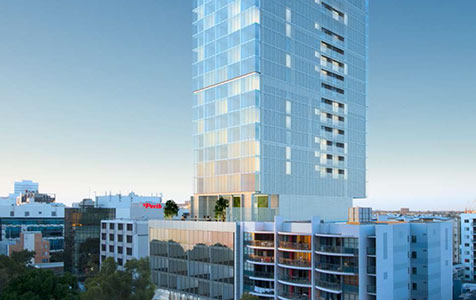 An artist's impression of the proposed 190 Adelaide Terrace hotel.

The City of Perth is poised to give the green light to plans for a $280 million, 40-level luxury hotel development in East Perth.

In its agenda for a meeting next week, the city's local development assessment panel resolves to approve the proposed development at 190 Adelaide Terrace.

The development has been put forward by architects Donaldson + Warn on behalf of land owner Loxalot Pty Ltd, however the hotel operator behind the project has not been named.

According to the planning documents, the hotel will cater for international travellers and business executives.

The proposal includes 266 hotel rooms and 156 car parking bays, an art gallery, cafe, bar and facilities including a fitness centre and conference room.

At a proposed height of 138 metres, the hotel would be among Perth's tallest buildings.

The development, which first went before the City of Perth in March last year, was originally designed as a 33-storey, 250-room hotel and was linked at the time to Singapore hotel group Amara Holdings.

Amara confirmed last year that it had held discussions with the landowner in regards to participating in the project but denied that it had made any commitments to the development.

Submissions received by the City of Perth during the public comment period raised concerns about noise, traffic and dust.

The panel said noise concerns would be controlled through environmental protection legislation, while a construction management plan would be requested to deal with issues relating to dust and site access.