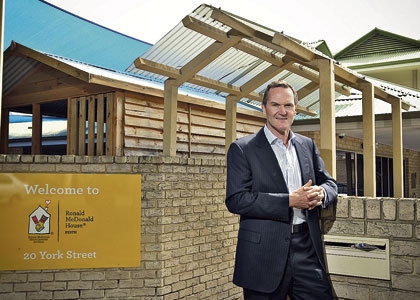 BIGGER HOME: Peter Meurs outside the Ronald McDonald House in Subiaco. The new $29 million house is due to be completed in 2015. Photo: Grant Currall

AFTER 22 years of housing country families of seriously ill children being treated in Perth, Ronald McDonald House will move from its Subiaco premises to the site of the new children’s hospital in Nedlands.

The new house will be located near the redeveloped QEII Medical Centre, due to be completed in 2015.

It will treble the capacity of the Subiaco property to meet increasing demand, making it the most accommodating in the country.

A campaign headed by prominent Western Australians aims to raise $20 million over the next 16 months to fund the building. There is already $9 million in the kitty from previous Ronald McDonald House capital raisings.

Construction of the house is scheduled to begin in the middle of next year and will cost $29 million and is also due to be completed in 2015.

Fortescue Metals Group director of operations Peter Meurs heads the ‘Stronger Together’ campaign. It is the first time he has worked with Ronald McDonald House and in a leadership position of this nature.

He will be joined by campaign patrons cricket legend Adam Gilchrist and former WA governor Ken Mchael. Businessman Dalton Gooding has been put in charge of raising money from the business community.

Mr Meurs said it was always recognised Ronald McDonald House would play a vital role in supporting the relocation of the children’s hospital to Nedlands.

He said it was essential the house was within in walking distance of the hospital because families ended up staying for long periods of time, sometimes six months or more.

“The plan for fundraising is to start with Western Australian philanthropists, trusts and foundations,” Mr Meurs said.

“We will talk to business leaders and engage with them ... and then work our way through to corporations and, ultimately, to community groups.

Mr Meurs was confident the team would meet the $20 million target within the 16-month time frame.

“This is a program that Western Australia really appreciates,” he said.

“The current house has accommodation for 72 people and the new one will be able to accommodate 180 people.

Between 2007 and 2011, the occupancy rate grew more than 50 per cent, which has forced Ronald McDonald House to turn away families because of a lack of accommodation.

WA has the lowest number of Ronald McDonald House beds per family in the country. There are currently 44,344 people per bed in WA; the second-worst shortage is 24,755 in NSW.

The building will reduce this number to 14,662 reversing WA’s position to become the best-equipped Ronald McDonald facility in the country.

“The site has been assessed by the Environmental Protection Authority and deemed suitable ... and the architecture of the house has been accepted,” Mr Meurs said.

“Plans are at an advanced stage - we could tender for construction now - it’s really just a matter of getting the funds in place to allow us to proceed.”