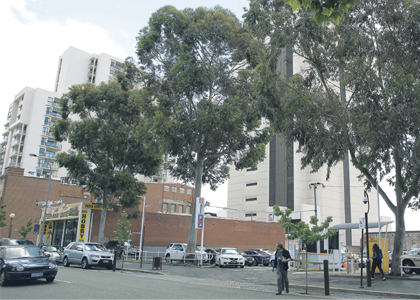 The latest application, for a development consisting of a 14-storey office building and a 32-storey apartment block, sparked concerns over height restrictions at a Perth City Council review last month.

The proposal is due to go before an independent panel of the WA Planning Commission on November 22.

WA Business News has been not able to determine if Mr Saraceni is behind the proposal. The project’s manager, Diploma Group, which was due to manage Mr Saraceni’s original project, and architect, Lawrence Scanlan & Associates, have both declined to comment.

Last year Mr Saraceni, who is involved in a court battle with the receiver of his Raine Square development, won approval from Perth City Council for a 15-storey, 30,000-square metre office building on the 4,900sqm Murray Street site.

The project, which has not gone ahead, was due to span the three blocks that make up the site, on the eastern side of Shafto Lane. It is owned by Nedlands-based Michael Hay Chung Mak.

Perth City Council questioned the latest application on the grounds the residential tower exceeded the height restriction for the area.

Because the development is valued at more than $15 million, a compulsory submission has to be made to the WAPC’s Development Assessment Panel, which is independent of local government and WAPC influence.

Diploma Group is confirmed as project manager for the two-tower development if it goes ahead.

The office tower has 11 floors of office space and 800sqm for a bar, cafe and restaurant on the ground floor.

The residential tower will include 284 apartments between the seventh and 30th floor. The first seven floors will house a retail space and 282 parking bays. The block will have 50 studio apartments, 50 single-bedroom residences and 184 two-bedroom apartments.

The design incorporates 200 bicycle bays, public amenities and a sheltered walkway to make it eligible for a bonus 20 per cent floor space. However, the council only approved half the extra space.

Diploma and Lawrence Scanlan & Associates have worked together in the past on two similar-sized residential projects - the 25-storey Rise Apartments and 22-storey Sky Apartments on Adelaide Terrace in East Perth.

Other significant projects in the area include a $14.8 million hotel project, which received development approval in July.

Hotel chain Oaks is planning a 15-storey, 88-room hotel at 623 Wellington Street. The hotel will be the chain’s first property in Perth. It has two hotels in Broome, the Oaks Broome and Oaks Cable Beach Sanctuary.