$130bn of major projects in WA

Nearly 140 major projects are either under way or planned for WA, new research by Business News has found. Click through to access the new list on the BNiQ Search Engine. 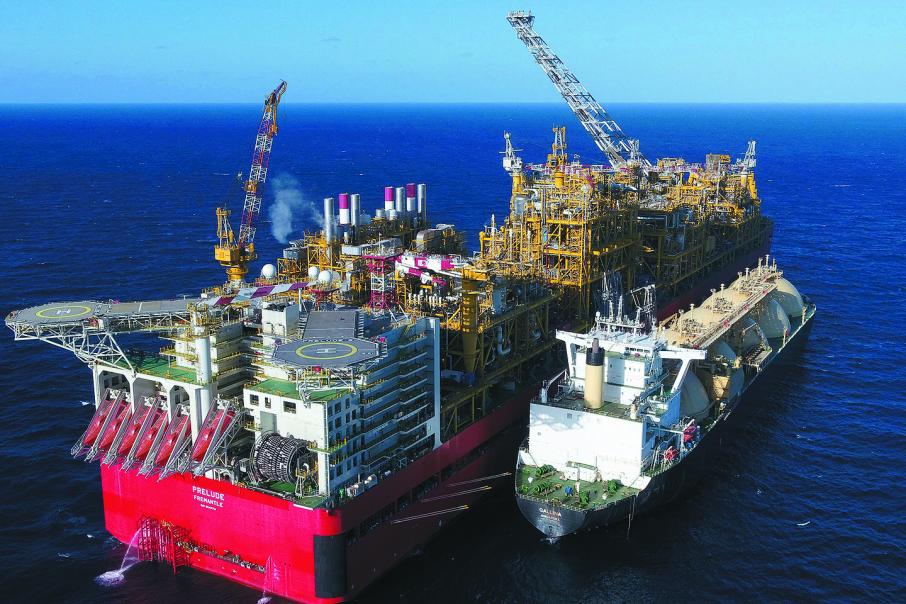 Shell's Prelude project is close to completion after recently taking on gas.

Nearly 140 major projects are either under way or planned for WA, new research by Business News has found.

A new database compiled by Business News has found about $130 billion of major projects under way or in the pipeline across the mining, oil and gas, transport and construction sectors in Western Australia.

Possible, likely and ongoing projects are included in the new list, which also gives details on contractors and job numbers, where available.

The top 20 projects alone on the list are worth about $101 billion, with the top 10 ongoing projects valued at a combined $80.4 billion. 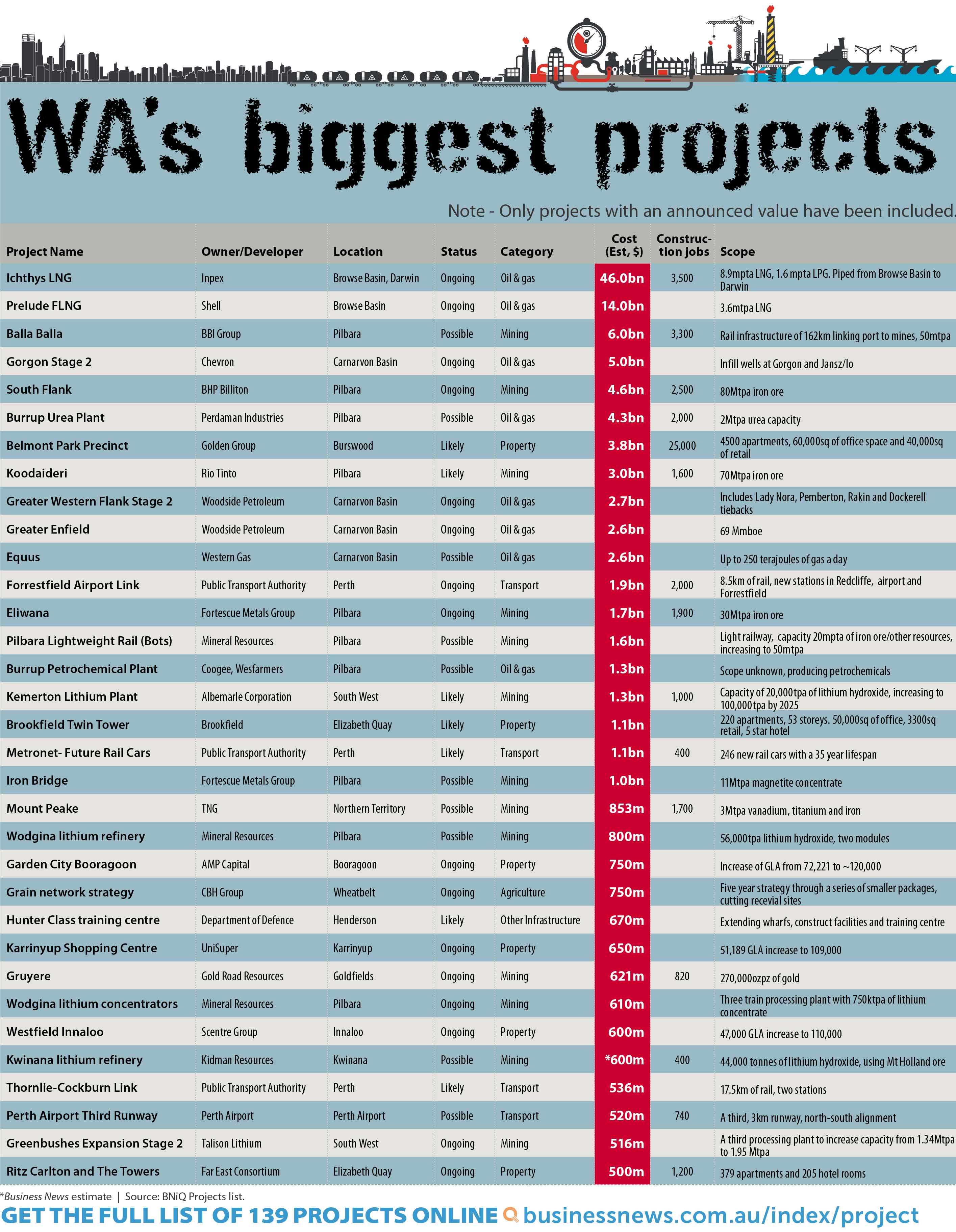 The resources industry dominates the upper echelons of the list.

For example, of the top 30 projects, 11 are in mining, and eight are in the oil and gas industry.

Property is the next most prevalent sector, with five projects, while four are in the transport space.

The data can also be used to breakdown which contractors are winning work, with about 40 names appearing on the list.

CPB Contractors is working on six major roads projects worth a combined $549 million, including Northlink stage three and the upgrade of Armadale Road, according to the BNiQ Search Engine.

Lendlease and BMD Constructions also have work under way, with BMD working on $150 million of projects including Boonanarring mineral sands mine and the Mitchell Freeway widening, while Lendlease has two packages with Main Roads for a total value of $252 million.

BGC Australia has six major property developments under way, with a total value of $600 million, according to the data.

The biggest is Norup + Wilson’s The Precinct in Mt Pleasant, where the company was appointed contractor in March.

MSP has about $1.5 billion of work by virtue of the company’s strong relationship with Tianqi Lithium.

It has two contracts at the Greenbushes mine, operated by Talison Lithium, with two new concentrators being built to triple capacity to around 2 million tonnes per annum.

Further work is at Tianqi’s Kwinana refinery, where MSP is delivering two lithium hydroxide processing trains worth about $700 million.

Other names on the list include PACT Construction, which is working on Edge Visionary Living’s Art House property development and the Department of Education’s Inner City College, and Probuild, which has around $700 million of property industry work.

The top 10 likely projects on the list are worth a combined $13 billion, while the top 10 possible projects have a value close to $20 billion.

The Koodaideri iron ore mine, Kemerton lithium refinery and Brookfield’s twin towers project are among the largest likely developments.

Rio Tinto’s Koodaideri will produce replacement iron ore tonnages as the company’s other large mines deplete, and although a final investment decision has not been announced, about $200 million of early works were approved at the end of July.

BHP Billiton and Fortescue Metals Group have both approved their major replacement mines, South Flank and Eliwana, with nearly $10 billion expected to be spent on replacement mines between the three iron ore majors.

US-based Albemarle Corporation is hoping to build the state’s second lithium refinery in Kemerton, near Bunbury, with stage one to have a capacity of 20,000 tonnes per annum of lithium hydroxide.

That project is in the likely category and should be producing by 2020.

To put that in perspective, Tianqi’s Kwinana refinery will produce 48,000tpa of lithium hydroxide once stage two is completed, with a capital cost of $400 million for phase one and about $300 million for the second processing train.

Kidman Resources and Mineral Resources are also planning lithium refineries, with Kidman’s Kwinana project to cost about $600 million, and that of MinRes roughly $800 million.

Both would be considered in the possible category.

Mineral Resources already has one big lithium project ongoing, the installation of concentrators at the Wodgina mine, which was initially producing direct shipping ore.

Golden Group’s plan for 4,500 apartments and 100,000 square metres of commercial space at Belmont Park sits at the top of the likely list when ranked by value.

The company held a groundbreaking ceremony in May, but a tender for stage one infrastructure at the development is expected to be finalised this month, and the project is to be developed in stages.

Another high-value likely project is Brookfield’s twin towers, a $1.1 billion development at Elizabeth Quay that will include 220 apartments, 50,000 square metres of office space and a five-star hotel.

The Thornlie to Cockburn rail link, Yanchep rail extension and Warradarge wind farm are the biggest state government-backed projects in the likely category.

The two rail lines will be procured in a single package, despite being separate projects, with a contract to be awarded in the next 12 months.

The Warradarge wind project is part of a deal between government-owned generator Synergy, Dutch Infrastructure Fund, and Cbus Super.

It will be necessary to ensure Synergy can meet its renewable energy target obligations.

There are a number of other high-profile projects in the likely category that do not yet have values and consequently are not included in the above total.

Most are in oil and gas.

Examples include Chevron’s Julimar/Brunello tieback, part of the Wheatstone development, and a second LNG train at Woodside Petroleum’s Pluto plant.

Development of Woodside’s Scarborough gas field, which would feed Pluto, has been judged as likely to proceed, while a tieback from the Woodside-led Browse LNG project to the North West Shelf Venture’s Karratha gas plant is in that category, albeit potentially some years away.

The two biggest projects on the list are set for completion in the very near future, however.

Inpex’s Ichthys, which links a field in the Browse Basin with a plant in Darwin via a 900-kilometre pipeline, is expected to produce first gas before September this year.

Shell’s Prelude FLNG had a test cargo introduced in June, with the company recently telling investors it expects shipments to begin this year.

Other ongoing projects on the list still have a way to run, including Chevron’s Gorgon stage two and the aforementioned South Flank and Eliwana mines.

The state’s biggest public sector project, the Forrestfield Airport Link, is due for completion in 2020.

Projects considered possible will create work for contractors in coming years, too, and their likelihood will be updated as they progress.

Among these is a suite of big resources projects, including the Balla Balla rail and port development in the Pilbara, backed by BBI Group, Perdaman Industries’ Burrup Urea plant, Western Gas’s Equus and Mineral Resources’ lightweight Pilbara rail network.