The Piccadilly Arcade is set for a $12 million upgrade, with a development application to restore the historic mall lodged with the City of Perth. 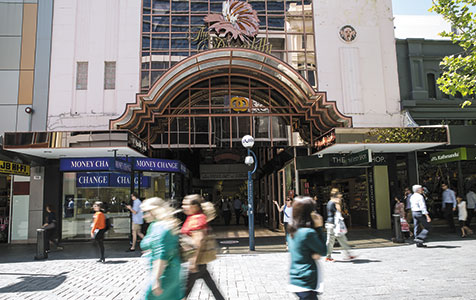 FORMER GLORY: The redevelopment of the Piccadilly Arcade will focus on restoring its art deco architecture. Photo: Attila Csaszar

The Piccadilly Arcade is set for a $12 million upgrade, with a development application to restore the historic mall lodged with the City of Perth.

The application, compiled by Palassis Architects, covers restoration of the existing mall as well as the heritage-listed cinema, which has been closed since October last year.

A representative for the mall’s offshore owners, Terry Posma, told Business News the restoration would be focused on restoring the arcade’s art deco architecture, including its facades.

The ground floor arcade will be gutted and restored, while the plan will keep options open for the upstairs area, including signing another cinema operator or finding an alternative use for the space. The redevelopment of the arcade will be the latest in a number of significant renovations at Perth’s CBD malls.

Hawaiian’s Carillon Arcade has been transformed at either end, with Top Shop Top Man taking up a large tenancy facing the Murray Street Mall and set to open by the end of the month, and specialist sneaker retailer Hype DC recently opening a flagship store facing the Hay Street Mall.

Also in Murray Street, 140 William has been repositioned from a predominantly retail centre to become a food and beverage hub.

The latest tenant to open at 140 William was chocolatier Koko Black, while fit-out works for German beer hall Brotzeit are ongoing, with the bar due to open once its liquor licence is finalised.

Brotzeit will be followed by another bar, Globe Lane, which is scheduled to open by the end of the year.

Fashion giant H&M will further change the dynamic of the city’s malls, with the chain understood to be close to finalising a lease at the GPO Building in Forrest Place.