Construction company Hanssen, earthworks contractor Screenwest and nickel miner First Quantum Minerals have each been fined in the past week over workplace safety breaches. 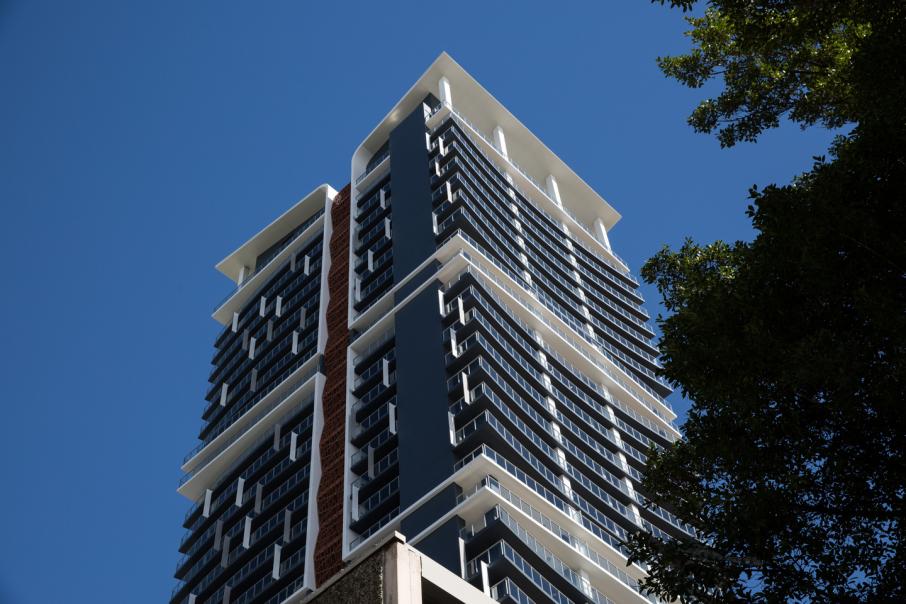 Hanssen was fined over safety breaches on the construction of the Concerto apartment tower. Photo: Gabriel Oliveira

Construction company Hanssen, earthworks contractor Screenwest and nickel miner First Quantum Minerals have each been fined in the past week over workplace safety breaches.

The largest fine was handed to Hanssen over safety breaches on the construction of the Concerto apartment tower on Adelaide Terrace in 2016.

In the Perth Magistrates Court on Monday, Hanssen was fined $60,000 (and ordered to pay $5,000 in costs) for failing to apply mesh to holes or openings in floors at the building site.

The court found that Hanssen repeatedly breached the Occupational Safety and Health Regulations by failing to install mesh in openings it cut for a cable shaft.

The charges followed a WorkSafe investigation into the death of German backpacker Marianka Heumann, who fell 13 stories down a ventilation shaft.

Hanssen was not charged over Ms Heumann’s death, which occurred when she returned to the work site to retrieve a personal item.

Magistrate Adam Hills-Wright noted that Hanssen did not instal mesh over the cable shaft because it believed it had a superior system.

Nonetheless, he found that the company had failed to comply with mandatory safety standards.

This fine followed several others in recent years, including over a 2018 incident at the Vue Tower project in East Perth,

In a second matter heard in the Albany Magistrates Court, contractor Screenwest (which has no connection to the government agency of the same name) and its director Quentin Victor Healy were fined a total of $44,000 (and ordered to pay $5,000 in costs).

The court found they failed to provide and maintain a safe work environment after Mr Healy reversed a skid steer loader into a confined area, striking a worker and causing serious leg injuries in May 2017.

WorkSafe Western Australia Commissioner Darren Kavanagh said the prosecutions should serve as a reminder that WorkSafe was prepared to take action.

“The two businesses prosecuted recently failed in their duty of care to provide and maintain a safe workplace, and the individuals prosecuted also did not comply with their duties under workplace safety laws,” he said.

“The cases demonstrate that the courts have recognised the importance of both businesses and individuals meeting their obligations.

“In the case of Hanssen Pty Ltd the circumstances of the death of the backpacker were investigated, and while no charges were laid, these other breaches were identified during the course of the investigation.

“The company believed it had a guarding method better than mesh, but Magistrate Hills-Wright commented that the law needed to discourage employers from taking matters into their own hands.”

In a third case, a machinery operator at a recycling facility was fined $7,500 (and ordered to pay $1,000 in costs) in Joondalup Magistrates Court on Friday.

The court found Warren James Piggott failed to take reasonable care during a 2019 incident in which a diesel mechanic was seriously injured.

Mr Piggott was working for Splendid Enterprises Pty Ltd - trading as Soils Aint Soils – at a recycling facility in Neerabup when the excavator he was operating moved, causing another worker to fall, leaving him with several serious injuries.

Mr Kavanagh said cases where mobile plant strikes workers were too common and were one of WorkSafe’s operational priority areas.

“Although these cases are quite different, the consistent message is that failing to keep workplaces safe can result in costly prosecution action in addition to the physical and mental impacts of a serious injury,” he added.

FQM was fined $19,000 in the Kalgoorlie Magistrates Court following a 2017 incident where a telehandler rolled over, endangering two workers at the Ravensthorpe nickel mine.

The mining operator pleaded guilty after being charged with failing to provide a safe working environment under the Mines Safety and Inspection Act 1994 (WA).

FQM contracted Southern Engineering and Agriculture (SEA) to remove and then reinstate piping around a tailings dam.

The SEA workers were attempting to move a pipe assembly by slinging it to a telehandler’s headboard when one of the slings broke and the load shifted, causing the vehicle to roll onto its side.

Department of Mines Industry Regulation and Safety Director Mines Safety Andrew Chaplyn said the rollover could have been far more serious and the incident highlighted the importance of ensuring workers were appropriately trained.

“The pipeline relocation work essentially involved workers disconnecting 6-8 kilometres of pipeline around the tailings dam, splitting it into smaller pieces, transporting it less than 20 metres from its original location and re-connecting the pieces,” he said.

“The telehandler was not rated to lift the pipe assembly or equipped to lift suspended loads, and this exposed the contractors to unacceptable hazards.

“FQM Australia Nickel has cooperated fully with the investigation and has put in place various measures following the incident.

In May this year, SEA partner Daniel Parker was fined $11,000 in the Esperance Magistrates Court after pleading guilty to failing to provide a safe working environment for the same incident.