The cost for sinking the railway line for the Northbridge Link has blown out by $100 million, months before a contractor is nominated to begin the project. 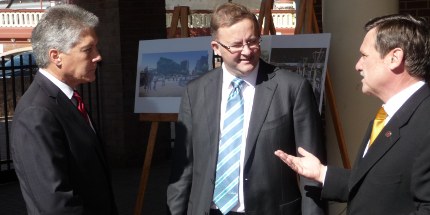 The cost for sinking the railway line for the Northbridge Link has blown out by $100 million, months before a contractor is nominated to begin the project.

Mr O'Brien said a contract could be let to a preferred contractor as early as February, with work physically commencing in the first quarter of 2011.

"That's not far away and there is a lot of work to be done," Mr O'Brien said.

Mr O'Brien said the planning process had firmed up the prices for the project, and the initial $500 million total project cost was merely a preliminary quote.

"We've now got final figures coming in for this project in 2010 dollars at just over $600 million in total, we've also made some important decisions that the projects, both the rail project and the bus station project, will have minimal overlap," Mr O'Brien said.

"They'll be conducted simultaneously, so that it's done in a reportable and more managed way."

According to the state transport minister, neither the federal government nor the City of Perth would be expected to kick in any extra funds to finance the additional $100 million.

"Whether or not there is any review of the federal commitment is a matter for the federal government," Mr O'Brien said.

"I would just say that I am very, very pleased, as is the Premier and the rest of government that the federal government has committed $236 million to this project.

"The City of Perth is not going to be charged with the principle capital costs of the major works we are discussing today, the request for proposal is the rail project to sink the railway and relocate the station."

Mr Albanese congratulated the WA government for ensuring the planning was now in place to advance the project.

"I have no doubt that in future years, when we come back and turn the first sod on the development, and when we complete the project, generations will say 'why didn't they do that before?'" Mr Albanese said.

"This is a visionary project for Perth, it is a great example once again of the Rudd government working in cooperation with the Barnett government to do things in the interest of Western Australians."