10 minutes on leadership with … Wayne Martin 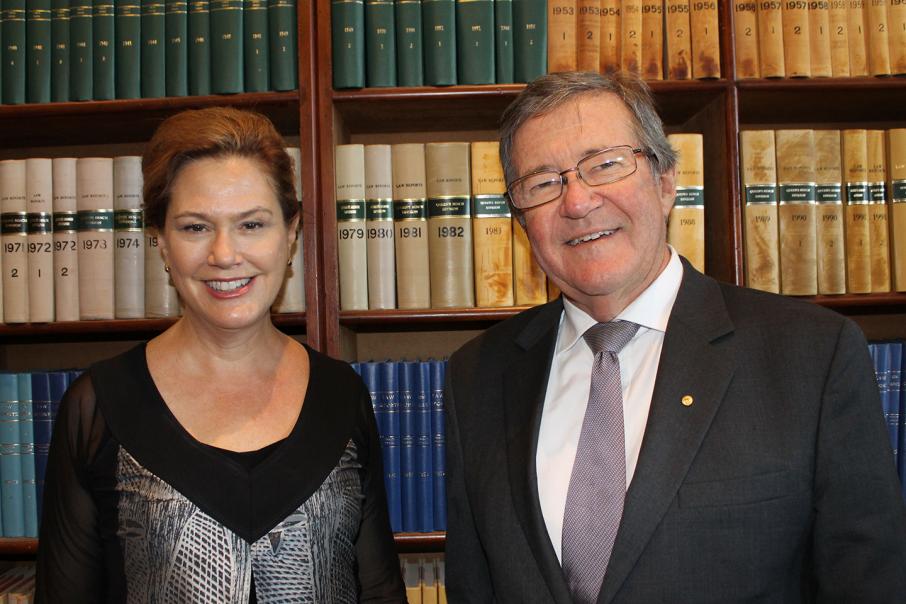 Robin McClellan with Wayne Martin, who says his role involves a large degree of consensus building.

RM: One of the things that always intrigues me is how people decide on their track. For example, when did it make sense for you to move into a position of great influence on society and people? Did that happen organically, or did you have a moment when you thought, ‘Wow, I need to be giving back more?’

WM: No. I’ve had a number of leadership roles, including within professional organisations and other not-for-profit organisations over the years, and I consciously decided to take up those positions. I sought them out, in some respects. With my current position, I didn’t seek that out; I never had an intention to become the chief justice of Western Australia. I think, indeed, the worst person you could appoint is somebody who really wanted to be the chief justice. So I just happened to be at a certain point in my career when a vacancy came up and the government approached me. I’d done a lot of talking about changes that needed to be made to our legal system and an opportunity came along for me to do something about it. I felt I’d better put up or shut up. So that’s really how; it wasn’t a conscious decision on my part, it just sort of came upon me, as it were.

RM: Have you seen a change in how others in the legal profession react to you and react to leadership?

WM: I think there’s been a significant change in the role of the chief justice, certainly during my time in the profession. Forty years ago, the chief justice was simply the most senior member of the court and had very little role to play in terms of the development of public policy. There was little role to play beyond the Supreme Court and very little public engagement.

That’s changed over time, and I think it’s changed during my time as well.

Now, people expect (and those within the profession expect) the chief justice to be the leader of the justice system and the courts – to speak publicly and engage with policymakers and with the public. There’s been a changing expectation in the office, and I think there’s been change on the part of the profession, too, in terms of their engagement with public policymaking. Now they are actively involved in law reform issues and in improving the justice system for the benefit of their clients. I think that’s one of the things that distinguishes the legal profession: most of their public engagement is not on their own behalf, it’s not in terms of trying to improve their conditions, it’s trying to improve the situation for their clients.

RM: Yours is an apolitical posting and obviously policy issues inevitably get tangled up in politics. Is that challenging?

WM: Well, the great challenge is that I have no power at all, so I’m a leader without power. So, trying to make change, you have to do it by encouragement, by persuading others who have the power – particularly government – that they need to make the changes that you’re promoting. It’s the same within the court. I can’t direct any change in the rules of the court, they are made by the judges collectively. So any decisions and any consequence have to be made collectively.

The description of my position is: ‘First among equals’. It’s not a hierarchical structure of leadership whereby I can direct others to do things; I have to encourage others to see my point of view and come along with me. That creates very special challenges as compared to, let’s say, a traditional corporate structure where people can be fired and have power to direct, and so forth. I don’t have any of those powers and so that means I have to lead by example. I have to encourage others by argument, by persuasion, and that adds a whole new dimension to the process.

RM: So, as you’ve come along, what have been some of the things you’ve developed, and your thoughts along those areas, what have you learned?

WM: Well, I’ve learned that you have to be patient because, if it’s a process of persuasion rather than direction, people take time to come around to your point of view. Some of the changes that I’ve wanted have taken me years longer than I hoped they would. I’ve also, I hope, learned the power of persuasion, in some respects. I’ve learned, in terms of my colleagues, that one has to lead by example; you have to be down in the trenches with the troops doing the things that they're doing in order to have credibility with them when you are trying to encourage change.

So there’s no escape from the idea of rolling up your sleeves, getting in at the coalface and doing what the troops do. I serve in every area of the court’s jurisdiction – I do vested civil work, I do crime on circuit, I sit in the Court of Appeal. I try and do a bit of everything so that, when we are discussing issues at a judges’ meeting, I can speak from a perspective of experience.

It also reinforces the morale of your colleagues if they know that you’re doing what they’re doing and sharing the load with them.

RM: There have been many high-profile cases in the past and the media have always been fascinated by specific cases. Do you see that changing as social media becomes more prevalent?

WM: The nature of public commentary on cases in our court has changed, and will continue to change as the nature of media changes. When I was a kid, public commentary was pretty much limited to the press, and then along came broadcasting, and so public commentary shifted to broadcasting. Now, the focus has shifted to the media and more people, more Australians, get their news and information from the internet than from any other source, and so that’s where the public commentary is taking place in relation to courts. It adds a different dimension because the commentary is sometimes by people or private publishers. For example, individuals who simply want to comment about what’s happening in our courts, and they can comment to the entire world. But they don’t have the training of a journalist. In some respects it’s really great because it opens up the capacity for people to get information about our courts; in other respects it's not so good because some of that commentary will be utterly ill informed and wrong. So it just adds a whole new dimension to all of that. But it has shifted the focus of the debate, I think.

RM: It must make your job quite interesting, because I’m sure that in the past you would open the newspaper and say, ‘How did the journalist get it so wrong?’, but in a way you can’t even follow this, even if you wanted to.

WM: Well, we discovered recently that there are about three bogus Supreme Court of Western Australia Facebook pages out there that we didn’t even know about. So there are things that look for all the world like a Facebook page for the Supreme Court of Western Australia that are entirely unauthorised, and people are posting material on those websites as if it’s us. Now, we just don’t have the resources to monitor what’s happening on the web every day, so we’ve just got to put up with it. Because of the bogus nature of a lot of this material, people are quite discriminating about what they see on the web. People don’t necessarily trust what they see on the web because they’ve learned, I suppose by experience, that there are people out there exploiting all the opportunities that the web provides for misleading other people.

There are probably still some people out there who believe it’s our website, but we just don't have the resources to deal with that, so we’ve just got to do the best we can.

We’ve always operated in a transparent environment; courts are one of the areas of public administration that’s been open to the public forever, as long as the courts in Australia have existed. Like the parliament, we are the most open – we come from a tradition of transparency. So, in a sense, that makes it easier for us to adjust to the new environment.

RM: I know you also have a real interest in some not-for-profit areas around health. Can you talk to us a little bit about that?

WM: A significant part of my right lung was removed, so that got me interested in lung disease, and I’ve had an active interest and engagement in that area for a while. I’ve also been involved in NFPs around the justice sector, things like PCYC, Police and Citizens Youth centres, Constable Care. Since being in this job, I have developed a significant interest in indigenous justice issues because of the gross over-representation of Aboriginal people in the criminal justice system of this state, and so I’ve become involved with a number of organisations that are active in that area.

There are other issues – homelessness, mental health, all of those sorts of things. Because I’ve seen the impact they have in our courts; homeless people, people with mental health problems are significantly over-represented in our courts. There is a tendency, I think, for the public to think that all the people in our courts and prisons are bad. Some of them are but a lot more of them have mental health issues, and that’s the sad reality of it.

RM: So what do you do to take care of you, while you’re taking care of all of us?

WM: Well, I’ve got three kids, so that keeps me pretty busy, and it’s sort of a nice counterfoil to what I do during the week. So getting up early on a Saturday morning to take your 12-year-old daughter to basketball and standing on the side of the basketball court is a nice release from the sort of stuff I do from day to day, and going surfing with my son. All of that is really what keeps me sane, I guess, like a lot of other people in the community.

RM:  I think you have a connection with rural Western Australia too, if I remember rightly?

WM: Yes. We’ve got a little property in the Wheatbelt that we duck up to whenever we can. Again, it’s great to do something completely different; get on a motorbike and ride it, quite badly, around rocky paddocks. I also pretend I know a little bit about fencing, and doing all that sort of thing. So it’s just something completely different that gives that other part of your brain, that you’re not normally using, a bit of a workout, and so that’s good.

RM: If you had one bit of advice to give young aspiring barristers and solicitors, what would that be?

WM: Not just for lawyers, I think for everybody … for me, I was really lucky, I picked a job that I like and, if you like doing something, you’re likely to be good at it. Because for me it wasn’t a hardship to work hard in a job that I really enjoyed; for most of my career it has been fun to go to work every morning. Sometimes it didn’t feel like fun but, if you look back on it, you’ve had an interesting week, and when I look back on my career I’ve had an interesting life. It’s pretty easy to be good at something you enjoy doing.