10 minutes on leadership with … Andrew Harding

In the first of a series of interviews with top WA business figures for Business News, Leadership WA chief executive officer Robin McClellan spent 10 minutes with Rio Tinto chief executive, iron ore, Andrew Harding, who said he looked to hire smart, reflective and curious people, and revealed mindfulness meditation had helped him be a better leader. 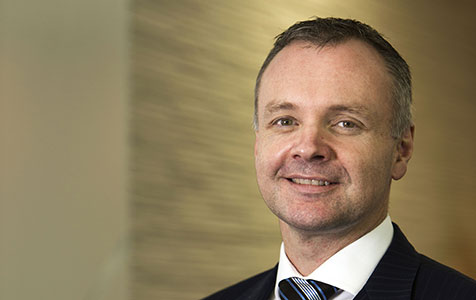 In the first of a series of interviews with top WA business figures for Business News, Leadership WA chief executive officer Robin McClellan spent 10 minutes with Rio Tinto chief executive, iron ore, Andrew Harding, who said he looked to hire smart, reflective and curious people, and revealed mindfulness meditation had helped him be a better leader.

RM: The industry has had a very high profile over the past year or so as commodity prices have shifted drastically. What do you do as a leader to help the world adjust – both the external world and the world within Rio Tinto – to this changing world and the changing face of iron ore prices in particular?

AH: Are these unusual times or not? Clearly, if you’re just looking at a one or two-year timeframe, what we’ve been going through in the last little while is more unusual than the immediate past. But, if you look over the 50-year history for the iron ore business – from its creation from nothing in north Western Australia through the decades, including things like the GFC – this is just another period in the history of the business.

We all bear it with greater interest when you’re actually experiencing it yourself. So I think if you went back and you asked a Sam Walsh or a Chris Renwick what it was like in their time, I think you’d get the same sort of response: ‘It was quite turbulent, with lots of change, and we had to deal with lots of issues’.

All that said – to get to the real question – how do you lead through times when there’s lots of change occurring? It’s quite simple to say, and remarkably difficult to execute effectively. Essentially, it’s about providing a vision and a strategy that will last the length of time that you’re actually attempting to steer the company.

So, from our point of view, we talk about making Rio Tinto Iron Ore the best iron ore business in the world. That is something that you can remind people of every day. It keeps us having a strong commitment to customer and product focus, high-performing teams, community and government interaction, and innovation and automation.

The other thing is the way you set your business up. We’ve designed a business that is at the bottom end of the cost curve and, in good times, that allows us to do very well and, in challenging times, from a price point of view, we still do okay.

By doing okay that means you can continue a lot of your fundamental programs – working with people and the direction that you set your strategy – you don’t have to chop and change. That’s important.

RM: We can say many resources companies now have the concept of a social licence to operate and a corporate social responsibility, but it seems that Rio Tinto really embraces that. Can you tell me how that’s developed in the company, and in your own world? You’ve worked in so many different parts of the mining industry, not just iron ore, but copper as well and in different countries.

So how has that community engagement in Rio Tinto evolved over the time you’ve been involved with the corporation?

But the leaders around at that time made a decision to accept native title. To make that acceptance of native title work, you had to build great relationships on the back of the land-use agreements; it wasn't just a contractual undertaking.

Those decisions underpinned a whole lot of policies that we’re following to this day. The reality is that, particularly in mining, you’re generally dealing with very long-term investments; a short mine is probably 15 or 20 years of life and the long ones, like Tom Price, are still running (the original mine began in 1966).

So you need to develop relationships that can withstand good times and challenging times, and that means you’ve got to go the extra yard to build the relationships and work with individuals, groups, communities and governments.

RM: Have you seen that space, those challenges, changing as social media and the internet make information – and sometimes misinformation – more widely available? Have you seen a shift, say maybe over the last 10 years, in how the company has had to engage with community groups and not-for-profit organisations?

AH: The way issues are presented in all the new media forms and all the various different forms of communication have clearly changed. It’s much faster, you have to be more transparent, you have to be able to communicate much more proactively because you can lose the agenda so much faster. The relationship management, though, I don’t feel has changed particularly. It’s still important to have the personal face-to-face connections.

RM: What sort of qualities do you look for in the people you want to help you lead?

AH: There are basically three characteristics – smart, reflective and curious.

Obviously there’s a full gamut of characteristics you’re looking at with people, and prioritisation is always difficult, but those would be the three I'd pick.

RM: Whom do you look to for inspiration as a role model and who does the boss have to talk to? How do you keep yourself personally on track but also how do you get help when you might need somebody to chat with?

AH: One of the benefits of being part of a very large diversified business is that each member of the executive committee has their own responsibility – mine is iron ore That separation enables a much freer conversation to occur between us all. We’re obviously in different parts of the world, in different sectors of the mining industry and as sponsors of different countries, like I am Australia, China and (South) Korea.

So I get to benefit from those discussions with others on the executive team, including Sam Walsh as the CEO and Chris Lynch as CFO.

While we find we have lots of things in common, there are differences and we have some different priorities that we’ve got to actually deal with, so it makes for a interesting discussion and often learning experience.

Outside the business, of course, sometimes the people, but also the places I go to look at and the books I read are very old names in leadership. The oldest text I’ve read on leadership is Aristotle’s. I also read biographies of individuals – the most recent one is the biography written by Walter Isaacson on Steve Jobs, which I think probably everyone has read. But there are a lot of things that you can learn in that about what not to do as well as what to do.

Then I’ve regularly had a mentor or a coach; they’re two different types of support, but I’ve had one or both over many of the past 15 years, or so.

RM: Regarding ‘work/life balance’, you’re fit and healthy and you run a complicated, big organisation that could probably keep you in the office 27 hours a day. How does Andrew take care of Andrew?

AH: I’ve moved away from saying ‘work/life balance’ to ‘work-life integration’, because I think that the balance sets up some poor notions. So I definitely go for staying healthy, so plenty of exercise. I used to, many years ago, overdo it; I don’t overdo it these days. Meditating has also been one of the smarter things I’ve done over the years, and I continue to do that.

I get a lot of fun out of the family, my kids – absolutely devoting real time to them is important. Sometimes when you’re running a big business you’ve got to make calls to get on a plane and go somewhere; they’re the hard calls that you’ve got to do. But I think I’ve managed to make my way through those decisions reasonably well, based on the feedback of my three daughters and my wife.

Then, I think, how do you actually make sense of the priority of all these things and how do you actually work it out? Well, it’s the strategy you’ve got in place from a business point of view. At the end of the day, the judgment call is about how you spend your time or not spend your time, and I make those calls in the umbrella provided by the strategy and the vision, and I do that confidently and keep moving forward.

You try not to have too many regrets, with the occasional learning opportunity when you get it wrong.

RM: If you could give some advice to yourself 20 years ago, is there anything valuable you would say?

AH: Probably around what I’ve learned from meditation and just the ethos behind mindfulness meditation, which is actually not being so hard on myself. I spent quite a few years when I was younger beating myself up for pretty much every small error. It is about being able to be kinder to yourself.

Good leaders are able to hold people to account, but in a kind way – hard on content, kind on people. You’ve also got to be able to do that with yourself. At the end of the day, you’re not trying to become error free but more error resilient.

RM: Rio Tinto, as a global leader in the resources industry, has to confront the changing environment worldwide. Practically anything we want to do as humans, someone somewhere has had to pop a hole in the ground in order for us to be able to do that – to be able to take a resource out of the ground, to grow something, to catch something, to fish.

Yet there seems to be a dichotomy. It seems hard to explain (or that parts of the general public can’t see or don’t understand) that if we want to progress we need innovation, we need industry, we need development and we need resources to do that with.

How does a company like Rio Tinto help shape government policy and public opinion so those decisions can be made in a way that acknowledges the importance of your activities and trust you to carry them out in a responsible way?

AH: At a very strategic level this is an issue that, as an industry response, is still something that has a lot of room for improvement and it’s quite complex.

In a modern society where everyone’s specialised, a lot of people are living in big cities, disconnected from the supply chain that actually delivers any product – whether it's iron ore, or whatever – to them.

It’s not easy for people to observe, it’s not well articulated and, to be honest, they’re probably busy with the rest of their lives. So the opportunity to make that information available is not readily present.

That is a big challenge. It’s not necessarily just an industry issue, it’s probably a whole government/community/industry/multiple-industry-type issue about how you actually rejoin people with the source of the supply chain, whether it’s agriculture or mining.

I think that’s what you can do as an organisation.