Who’ll pick up the bill, Bill?

Bill Shorten is coming under greater scrutiny and growing pressure due to his underwhelming performance since becoming opposition leader. 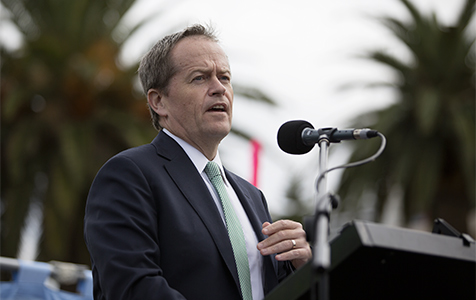 FOCUS: While changes brought in by Kevin Rudd make it harder for Labor to replace a leader, Bill Shorten is under the spotlight.

Bill Shorten is coming under greater scrutiny and growing pressure due to his underwhelming performance since becoming opposition leader.

Politicians know all-too well that cartoons can be a far more biting medium than the written word.

Standout cartoonists aren’t mere artists, but also insightful satirists and humourists who cut to the chase in terms of delivering rapier-sharp commentary that resonates with readers.

It’s because people so appreciate these insights that cartoonists are, and have been for centuries, employed in the media.

Without them, the media and politics would be duller.

All the above came to mind when I recently saw a cartoon by one of Australia’s greatest cartoonists, Larry Pickering, formerly of The Australian, now freelancing on his blog site, The Pickering Post.

Let me attempt to describe that cartoon.

His single-framed sketch depicted Prime Minister Tony Abbott with his feet firmly planted on the locked door of an aeroplane cockpit, teeth gritted and both hands desperately tugging the door handle.

Watching him are several terrified passengers.

Above these seemingly doomed passengers is the caption, “OK. Bill – Stop Muckin’ around”.

The cartoon appeared the day after worldwide press reports revealed that the pilot of Germanwings flight 4U9525, Andreas Lubitz, had killed 150 passengers and crew in a premeditated act to ‘make everyone remember’ him.

Coincidentally, just days before seeing the Pickering cartoon, which was highlighting Bill Shorten’s refusal to back government plans to confront Australia’s growing debt, overspending and other ominous economic trends, I had coffee with a now-retired Western Australian Labor politician.

The reason our get together is pertinent is that I’ve only ever met Mr Shorten once – more than 10 years ago – and it was this politician who’d introduced us.

Understandably, during our chat we discussed Mr Shorten’s dismal performance as leader.

“Bill’s really disappointed me,” was the ex-politician’s closing remark.

Those words, it must be stressed, came from one of the few retired WA politicians who knew Mr Shorten well before he’d entered federal parliament in 2007 (and still knows him).

How many others in Labor’s ranks hold a similar view?

I suspect it’s a sizeable and growing number.

The overambitious Mr Shorten has clearly decided victory will be assured in 2016 by simply gridlocking the coalition’s legislative attempts to reverse some of Labor’s overspending from the Rudd-Gillard years.

Mr Shorten’s rhetoric and approach indicates he plans to revert to similar spending habits if elected to government, especially in the vote-buying welfare, education and health areas.

Just the first of these presently stands at $40 billion, or 10 per cent of federal outlays and rising at 6 per cent annually.

He’s also quashed suggestions that Labor has accepted the successful turn-back of foreigners who expect to be accepted as legitimate migrants by sailing to Australia in privately hired boats.

In other words he’s committed to repeating Kevin Rudd’s 2008 reversal of the Howard government’s policy that, when discarded, led to 50,000 unauthorised boat arrivals at a cost to Australia of $14 billion.

This obsession with the policies Kevin Rudd and Julia Gillard is mind boggling when one recalls that Mr Shorten was a key player in their removals as Labor leaders, once they’d become electoral liabilities in 2010 and 2013 respectively.

Although their demonstrably failed policies had prompted him to move against each leader, he’s determined to back-flip again, this time by recycling their policies once he gets his hands on to the joystick of government.

He’s certainly made hay over the past 18 months criticising, stalling and blocking savings measures proposed by the Abbott government.

True, oppositions are expected to oppose.

But to go into an election with policies rejected at a preceding contest adds new meaning to recycling.

This, plus Mr Shorten’s inability to come forward with a single original alternative policy on anything has understandably begun prompting many on his front and back bench to wonder if he’s the man to topple still struggling Mr Abbott.

What this means is that, as the major parties enter the second half of the life of the current parliament, each could move to oust their leader; the government by removing Mr Abbott for Malcolm Turnbull or Julie Bishop, and the latter by ousting Mr Shorten for Chris Bowen, Anthony Albanese, or Tanya Plibersek.

Those who doubt such an eventuality should cast their mind back to those six months between December 2009 and June 2010 when the Liberals and Labor effected sudden leadership change.

After which would come an election contest between a big-taxing party and a bigger-taxing one.