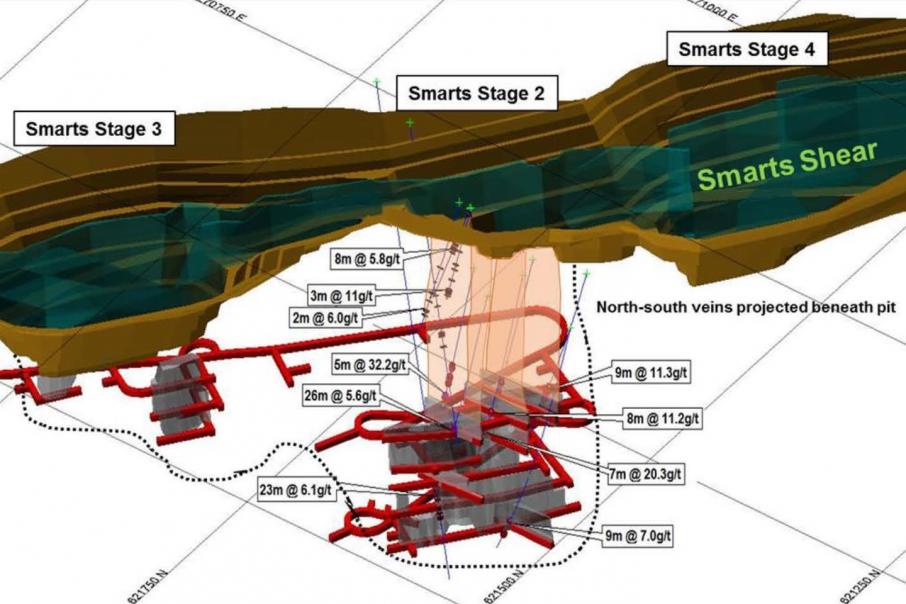 Analysis from drilling results at the Smarts deposit indicates the gold mineralisation may extend beyond the current design of the developing underground operation, with the company set to deliver an updated resource and its maiden reserve for the deposit in the coming weeks.

Additional results from the two recently reported reserve drill holes at Smarts include 1m at 12.98 g/t gold from 144m and 9m at 2.35 g/t gold from 234m down-hole. These latest results are, perhaps, the icing on the cake for the Smarts campaign. Troy has returned outstanding intersections from every hole it drilled into the high-grade discovery below the Smarts open pit.

Troy is now set to kick off a 9-hole diamond drilling campaign on the north-western extensions to the Smart deposit following up on previous results of up to 14m at 8.39 g/t gold and 4m at 15.37 g/t gold.

The Smarts gold deposit has previously been mined as an open pit operation located less than 2km north-east of Troy’s Karouni gold plant in Guyana, on the north-east coast of South America. The project is approximately 160km south-west of the capital of Georgetown and covers around 850 square kilometres of the mineral-rich Guiana Shield, which the company considers to be one of the last underexplored greenstone terranes in the world.

Karouni lies within the Guiana orogenic gold belt which extends over more than 1,250km and is around 70km wide, stretching from Venezuela in the east to French Guiana in the west. The belt hosts a treasure trove of gold mineralisation including the 18 million-ounce El Callao gold deposit in Venezuela, the 10 million-ounce Toroparu deposit in Guyana and the 13.7 million-ounce Gross Rosebel gold deposit, next door in Suriname.

Troy commenced production at Karouni in 2015, and whilst the company considers it is still early days at the operation, the mine has delivered more than 240,000 ounces of gold. It boasts a burgeoning resource of 16 million tonnes at 2 g/t gold hosting a potentially lucrative 1,007,000 ounces of gold.

The company’s resource inventory looks set to grow as exploration continues across the Karouni project area. Troy’s aggressive drilling campaign targeting a range of discoveries surrounding the Karouni mill suggests it is now hitting its straps and tapping into the true potential of the region.

Aside from the Smarts development program, Troy is also drilling at the Goldstar prospect 10km north of the mill, where exploration has outlined gold mineralisation along more than 1,000m of strike and is building a large, open pit resource. Trenching and drilling continue to unearth a wealth of near-surface ore, with results including 17m at 2.21 g/t gold from only 3m below surface.

Other targets set to feel the drill bit include the Ohio Creek, Gem Creek and Upper Itaki prospects, which sit a short distance outside the current mine environs.

The company’s operation continues to gain momentum with mining from the Hicks deposit feeding the mill at Karouni, whilst the Smarts underground operation is taking shape. A feasibility study for the high-grade discovery is due to be tabled in the first quarter of 2021.

Troy continues to pour gold in Guyana with a fleet of drill rigs now active across the project area. As the company builds on its unique understanding of the geology and gold mineralisation in this underexplored terrane, Troy looks well-placed to expand its resource book and operations into the new year.