Universities need to arm graduates with a set of global skills to deal with unprecedented technological change, according to Deborah Terry. 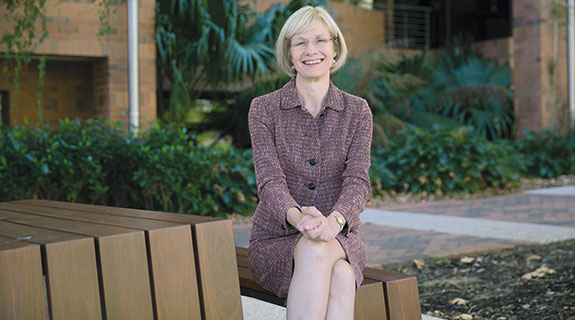 future: Deborah Terry says universities must teach students a set of skills that will enable them to adapt to a changing workplace. Photo: Attila Csaszar

Universities need to arm graduates with a set of global skills to deal with unprecedented technological change, according to Deborah Terry.

Deborah Terry has been at the helm of Curtin University for little more than a year but she has a clear vision of the institution’s role and relevance as a pathway into the rapidly evolving world of work.

She points to research out of Oxford University that suggests half of the occupations in the current economy could disappear within a decade as automation swallows industries such as logistics and office administration.

This is the world of work beyond the walls of the university and it’s a place where adaptability will be the key, according to Professor Terry.

“Students need a set of skills that will allow them to adapt,” Professor Terry said.

“Global thinking, problem solving, the capacity to understand basic computer code and how to deal with big data.

“These are the skills that will hold them in good stead even if they change careers.”

While her career path has diverted Professor Terry from the study of human behaviour, her passion for the field is undimmed.

“Psychology is one of the great frontiers of the unknown,” she said.

“If we can understand human behaviour and the underpinnings of it, what drives it, we can make great strides in a number of areas.”

Understanding the needs of students and helping them reap the transformative benefits of education is a recurring motif with Professor Terry.

Professor Terry grew up in a family that valued education, and is thankful her parents encouraged her to study and pursue her ambitions.

But this is not the case for all of Curtin’s students, a number who are the first person in their family to attend university.

For this cohort Curtin needs to provide more than a degree; Professor Terry said these students needed role models and experiences that gave them the confidence to pursue their goals.

“I was very lucky … I had a head start in terms of having those opportunities and the confidence to pursue them,” she said.

“So many young people in Australia live in communities where they may not have that access to education.”

The diversity of Curtin’s student population and its commitment to providing opportunities to students, irrespective of their background, was one of the factors that drew Professor Terry to the university.

It connects powerfully with her belief in the transformative power of education, as well as her commitment to increasing the proportion of women in the upper echelons of academia.

“The fundamental importance of universities is in terms of driving economic prosperity and diversity,” Professor Terry told Business News.

“But what will transform individuals and lives is education.

Women account for more than 50 per cent of the student population at Curtin, but the same analysis of the academic work force reveals only 19 per cent of Curtin professors are female.

“It comes back to role models … and for an academic career you have to have a PhD so you are looking at eight to 10 years of education; and then there is the critical post-PhD period, which is critical in terms of attracting research funding,” Professor Terry said.

She said balancing these demands with the responsibilities of raising children was tough.

“I’ve got three children so I know the juggle, but I was very fortunate to have a very supportive partner, who took on a significant role in bringing up the children.”

Professor Terry suggested the burden of raising children needed to be a consideration when assessing the overall performance of academics who were also parents.

But gender diversity is not just a university issue. In many cases Professor Terry said it had its roots in school.

“Part of what we need to do as a sector is to work across the whole education system and work very closely with our counterparts in secondary and primary education,” she said.

“We had a principals event here the other day and we have a shared set of issues, and the more we can work across the boundaries the more successful we will be.”

Universities operate in a global market and Curtin is competing every day with institutions in the UK, US and Canada for overseas enrolments.

Many of these students hail from China or India, communities that value and revere education in a way many Australians don’t.

Chinese parents will often put away money from the time their child is born to ensure they can afford the best possible education.

In Australia, money still seems to trump learning; and in times of plenty like the recent resources boom, some young people took the big wages on offer instead of pursuing higher learning.

As the economy slows, more people are joining university or returning to study in a bid to keep pace with technological change.

Bolstering the profile of learning in Australia goes hand it hand with educating the broader community about the value and importance of the STEM skills – science, technology, engineering and mathematics – according to Professor Terry.

“We need to get our science champions into primary schools and high schools,” she said.

“It’s like the Square Kilometre Array (story), this is one of the 21st century’s biggest projects and we need to sell that to the community.”

Selling the Curtin story is an important part of Professor Terry’s role as vice-chancellor, especially in a world where educational destinations can quickly go in and out of fashion.

Curtin has the biggest cohort of overseas students of all the public universities in WA and it works hard to promote the institution’s credentials.

“Curtin is on a very strong upward trajectory; it went up more places in the major international rankings than any other Australian university last year,” Professor Terry said.

But there is more work to do, and Professor Terry plans to build Curtin into an international research and education leader during her time as vice-chancellor.

“What I would like to do is really create an innovation precinct,” she said.

“We are already a wonderful example of a major university that is focused on industry.”

Building those connections between research and industry is a major target for all the public universities in WA as they grapple with the reality of dwindling public funding.

It’s not a new idea, clustering innovative industry and start-up businesses around universities – the Ivy League universities in the US have been doing it for generations.

The biggest hurdle in WA has always been its mineral wealth, which has overshadowed education’s status as the country’s third biggest export earner.

Universities will need to consider different capital models, according to Professor Terry, if they are to grow and compete in an international market.

“The overriding goal and objective is that the sector has to be financially sustainable, but we have to be able to maintain the quality,” she said.