Treasurer Mike Nahan has reiterated the state government’s commitment to return to surplus by 2016-17, but has pledged not to do it by hitting families or businesses, at today’s Business News Success and Leadership breakfast. 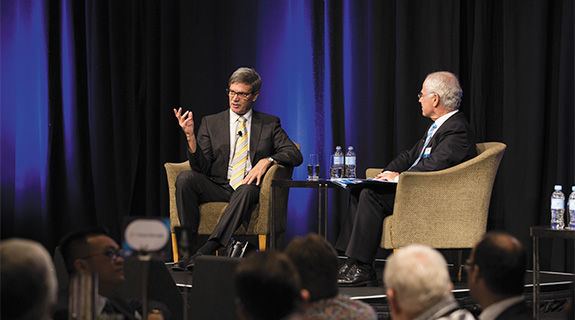 Treasurer Mike Nahan has reiterated the state government’s commitment to return to surplus by 2016-17, but has pledged not to do it by hitting families or businesses, at today’s Business News Success and Leadership breakfast.

Dr Nahan said Western Australia’s economy wouldn’t be able to withstand its biggest business, the state government, slamming on the brakes and so the government was acting to drive cost reductions internally.

“We’re looking at a whole raft of reforms, including two I’m very proud of,” he said.

“We’re going back to zero-based budgeting on one department after another- we’ve announced seven- where we sit down and look at … what it does, in detail with a group of experts from outside.

“We’ll go back to every aspect of every department and look and re-evaluate what they need to do.”

A zero-based budget would require departments to justify every item of expenditure, with the budget tailored to meet objective for a period.

Dr Nahan said the state government would also work to reduce public sector wage growth to 2.1 per cent, after more than 8 per cent annual growth in the decade to 2012.

He said wages had been pushed up by the mining boom, but jobs would be replaced at lower pay grades in future, making a leaner and more efficient public service.

“We’re going to make the adjustment within our own house, within the public service,” Dr Nahan said.

There was a net reduction of around 1,500 public servants in the previous financial year, and the treasurer expected a similar reduction this year.

Dr Nahan also revealed he would visit federal Treasurer Joe Hockey next month to build a compromise on the state’s GST collection.

He said he hoped at the minimum to ensure that the royalties estimates made by the Grants Commission were reflective of current prices and not using a moving average over a number of years.

Dr Nahan’s options on the revenue side of the ledger are limited, with the iron ore price falling by more than half in less than 12 months, and after again ruling out toll roads or widespread adoption of poker machines.

He also reiterated the government's oppostition to sales of Water Corporation and Western Power, while noting that a Synergy sale would require a substantial amount of reform in the sector first.

A second round of asset sales would soon be announced, however.

See photos from the Success and Leadership breakfast here.