A property development planned for Newman has brought together a couple of unlikely bedfellows and set up a unique social enterprise for the St Bart’s not-for-profit group. 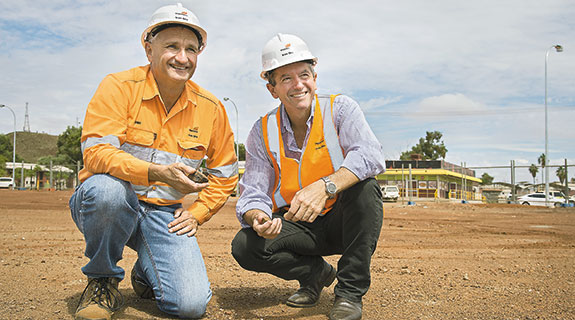 A property development planned for Newman has brought together a couple of unlikely bedfellows and set up a unique social enterprise for the St Bart’s not-for-profit group.

A $70 MILLION property development planned for the Pilbara mining town of Newman is expected to provide income security for Perth-based not for profit St Bartholomew’s House, which is now investigating how it can expand the footprint of its charitable services.

The unique project is being spearheaded by the state through a $40 million town centre upgrade from Royalties for Regions funds and BHP Billiton, which is donating $30 million for a new shopping centre, which will be managed by St Bart’s.

BHP Billiton iron ore president Jimmy Wilson said profits from the planned 4,500 square metre retail centre would be directed into a trust to support and provide grants for community activities in Newman.

St Bart’s board director Bevan Sturgess-Smith said while many would wonder why a NFP would enter the retail sector, the organisation had previous experience overseeing the construction and management of its $32 million accommodation project in East Perth.

“The model of a partnership with a major corporate and a not for profit to create a long-term sustainable income from a major piece of infrastructure, as far as all our research can tell, has never been done before,” Mr Sturgess-Smith told Business News.

“Often organisations like us (when) we apply for funding, it might be only for one or two years until the next lot of funding is available … so this provides a long-term focus.

“This innovative model sets a new standard in corporate philanthropy and ensures that our bricks and mortar investment translates into positive, long-lasting economic and social benefits for the local community.”

While the local council, the state government and developers have praised the partnership’s philanthropic features, the centre’s location – directly across the street from an existing retail centre – has come under fire from the Newman Boulevard centre manager, Davyd Hooper.

Mr Hooper told Business News the existing centre had lost tenants in the past 12 months following a downturn in iron ore prices and the negative flow-on effects on the local economy.

While supportive of the state government’s efforts to redevelop the town centre, Mr Hooper questioned the timing of opening a new retail centre while other stores were struggling.

In the past 12 months a coffee shop, women’s clothing store Rockmans, and fast food chain Chicken Treat have vacated the 6,500sqm shopping centre, he said.

However, the proponents of the new retail centre dismissed concerns the two centres couldn’t co-exist.

“I think there’s enough business for everybody in the town,” Mr Sturgess-Smith said.

“I think the Newman community over the years has struggled to get to the point where it’s a city that people actually want to live in and be a part of, and I think that’s been a strong focus of state government,” Mr Redman said

• The reporter travelled to Newman courtesy of BHP Billiton.