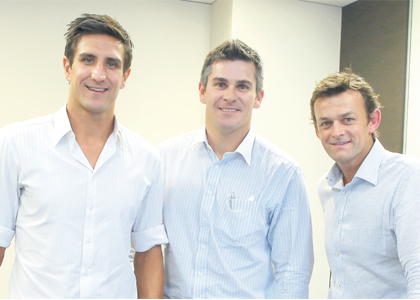 As managing director of Scout Entertainment, Mr Sierakowski has already parlayed his sporting connections into a hospitality and sponsorship business.

He and his new business partners in the Signature Club are now aiming to sell something more to the state’s business community.

“It’s about engaging with businesses that we can connect together; that’s where it’s different,” Mr Sierakowski said.

“It’s a format that’s a lot more professional than what is currently being offered.”

The aim of the Signature Club is to bring together a small number of businesses from different industry sectors, at locations that could range from major sporting events to small boardroom forums.

For Mr Gilchrist, the new role is another step in his career beyond being a full-time cricketer.

“Our job as ambassadors is to learn more about each member and hopefully have some positive influence or input into them forging new relationships, stronger relationships,” Mr Gilchrist said.

Having spent most of his life in the sporting arena, Mr Gilchrist said the business world held a lot of interest.

“As I’ve moved beyond my full-time professional life as a sportsman, I’ve found that space is really interesting, dealing with a wide variety of people and broadening my horizons,” he said.

His resume includes working with Mark Barnaba as a member of the WA steering committee for the Commonwealth Business Forum held in Perth in 2011, sitting on the board of listed forestry company TFS Corporation as a non-executive director, and being chairman of the national Australia Day Council.

Fremantle Dockers captain Mr Pavlich is also preparing for life after sport, having already completed a science degree and now working on his MBA at the University of Western Australia.

He said the new venture would be different from most speaking engagements and networking events.

“It’s more the hands-on, sitting around a boardroom table, drawing upon Adam’s experiences, my experiences, understanding the businesses more acutely and assisting them to achieve their goals.

“With a small group, say, 10 businesses catching up with Adam and me at different events and boardroom lunches, and with continuity between them, there starts to be a genuine connection and engagement, and pollination of ideas.”

Mr Sierakowski agrees the concept is underpinned by the personal brands of the sporting stars.

“It’s for companies that can see the worth in their brands, and can see the value of having a relationship with Adam or Matthew, for their own people, or with their customers,” Mr Sierakowski said.

The first proposed event is a trip to India linked to Mr Gilchrist’s role as captain of Kings XI Punjab in the six-week IPL cricket competition.

“It’s not just turn up and watch three games of cricket; the engagement will be with my franchise, exposing people to team planning and strategy, to the point of sitting in a team meeting, and watching that cultural experience,” Mr Gilchrist said.

“They’ll be looking inside the franchise in a real hands-on experience."