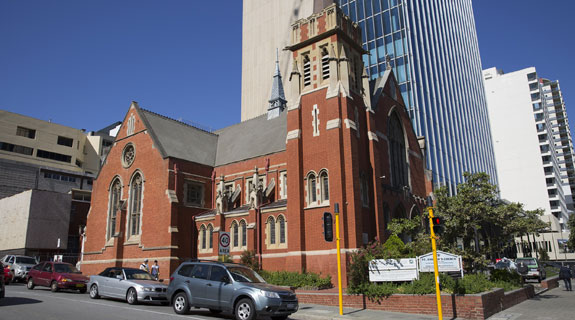 The church site, which was sold by the Uniting Church’s WA property trust, has planning approval for a 41-storey mixed use development comprising 280 apartments as well as retail and hospitality tenancies.

Both companies are led by Singaporean billionaire James Koh, with Global Premium Hotels’ portfolio comprising 23 hotels in Singapore, while Fragrance Group has also developed six large-scale apartment projects in Singapore, with a further four in the construction or planning stage.

Business News understands the Uniting Church has had several approaches from prominent developers in recent years to buy the site, however a suitable deal had not been finalised.

The church itself has been closed since midway through last year, because of issues with its supporting structure and roof.

A $22 million development plan lodged in May 2014 comprised a 22-storey office tower, however uncertainty in the commercial market made that proposal unviable.

The Uniting Church dropped that plan in September last year to lodge a proposal for an $88 million apartment building, of 35 storeys.

Under all of the proposals, the existing commercial buildings to the rear of the 2,600 square metre site would be demolished, with the church itself restored and adapted for a new use.

Fragrance Group has been steadily increasing its presence in Perth since buying a development site at 374-396 Murray Street, which is currently being used as a Wilson car park.

That site was bought from Westbridge Property Group in July last year, for $40 million.

The City of Perth development assessment panel approved Fragrance Group’s proposal to build a 33-storey apartment tower containing 301 dwellings, and a 28-level, 487-room hotel on the site in April, despite the plan being recommended for refusal by planning officers.

Westbridge Property Group had initially planned a 14-level office tower and a 32-level apartment building on the site, prior to selling the plot to the Singaporean group.

Fragrance Group’s other big acquisition in Perth was picking up Milligan Square from Georgiou Capital in late 2014, for $30 millioon.

At Milligan Square, Fragrance Group is planning to build a 132-room hotel and restore the historic Pearl Villa and Milligan Hostel.

Georgiou’s original proposal included an office tower, but Fragrance Group has since switched gears on that component, in favour of an apartment building.