Leighton Properties has revealed the simultaneous construction of its Kings Square precinct's four office towers was a condition of international oil and gas giant Shell taking up an entire building at the development in the Perth CBD. 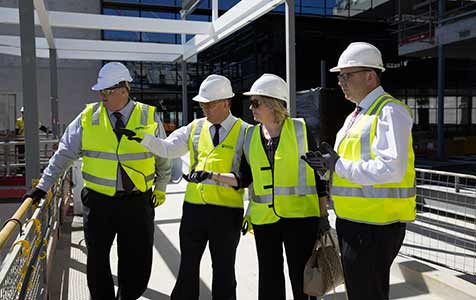 Leighton Properties has revealed the simultaneous construction of its Kings Square precinct's four office towers was a condition of international oil and gas giant Shell taking up an entire building at the development in the Perth CBD.

The 20,440 square metre KS2 is one of three buildings being developed by Leighton Properties on behalf of owner, Dexus Property Group at Kings Square.

A fourth tower, KS4, is also currently being developed by Leighton, for Perth-based health insurer HBF.

Leighton national head of commercial Andrew Borger said Shell had been the catalyst for the ambitious plan to construct four significant buildings at the same time.

Mr Borger recalled meeting with executives from Shell in September 2012 at the culmination of negotiations for the leasing deal at KS2.

“We were down to the final shortlist of three contenders to win their signature on the lease for that building,” Mr Borger said.

“We convinced ourselves we were going to get bad news, but after 10 minutes we were put out of our misery, and we were told by Shell that they would like to come to our building, but there was a very small but.”

That caveat, Mr Borger said, was to develop the entire Kings Square precinct at once, as Shell did not want to move into a precinct which was still under construction.

“At that point in time we took a big gulp of air and said ‘yes we can work through that’,” Mr Borger said.

“But what was most staggering was within less than 24 hours, we received a call from HBF saying ‘we would also like to have our headquarters here in this great project.’” The Kings Square precinct under construction, (from left) KS1, KS2 and KS3, with KS4 in the foreground. Photo: Attila Csaszar.

“Kings Square is very important to us and we hope that it reflects our long-term commitment to Perth as a city for investment,” she said.

“Not only will this building bring an enormous amount of new amenity for the tenants, especially from a sustainability perspective, but it will also bring a whole new level of public infrastructure and leading urban design.”

Mr Day said the Kings Square precinct was playing a major part in the transformation of the city as part of the $1.2 billion Perth City Link.

He said the precinct would complement the other transformative projects either under way or recently completed, including Elizabeth Quay, Riverside, the Perth Cultural Centre and the City of Perth-led redevelopment of Forrest Place.

“Kings Square certainly does represent a significant investment in the future of Perth,” Mr Day said.

“It is quite an extraordinary achievement to have four buildings under construction at the same time in one precinct.

“It’s a massive undertaking which I understand is unparalleled anywhere in the country.

“Once these buildings are completed, Kings Square will reinvigorate this area.”

Ms Scaffidi shared the view that Kings Square would be a welcome addition to the CBD.

“These areas are going to certainly bring a lot of employment opportunities to our capital city, but also be home for many people and also a place of recreation and entertainment for so many more,” she said.

“That is the beauty of literally unlocking areas that were previously cut off to the general public.”