Blackstone Minerals has kicked off drilling at its Ta Khoa nickel project located in northern Vietnam and is initially targeting disseminated sulphide mineralisation at the Ban Phuc prospect, following geophysical surveys that showed chargeable anomalies were present. According to the company, the initial IP survey test line run through the area showed a strong correlation with the known massive and disseminated sulphide occurrences. 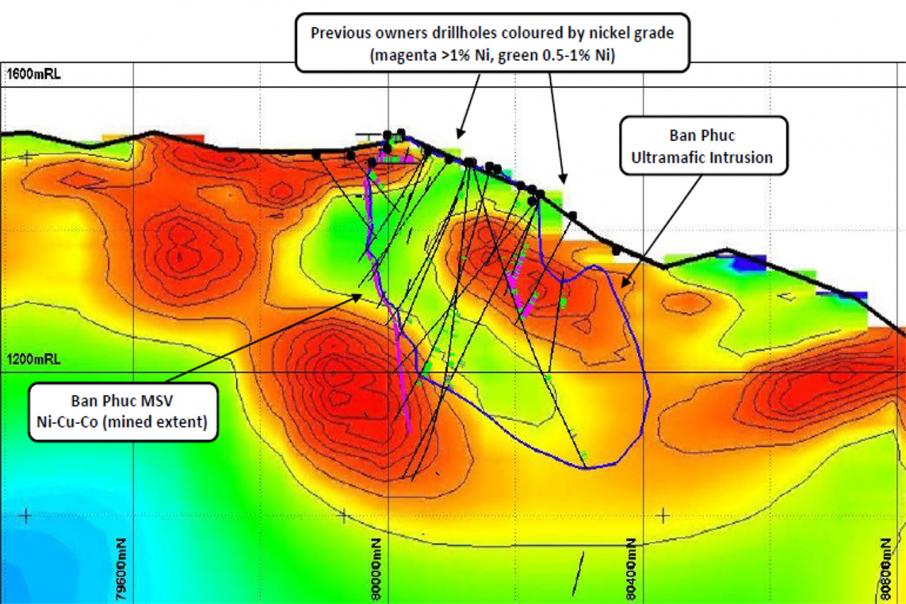 Blackstone Minerals has kicked off its maiden diamond drilling program at the Ta Khoa nickel project located in northern Vietnam.

The initial work targets disseminated sulphide, or “DSS”, mineralisation at the Ban Phuc prospect, where ground geophysical surveys over a prospective ultramafic intrusion showed significant chargeable anomalies near the surface.

The company has also commenced an induced polarisation, or “IP”, geophysical survey at Ban Phuc, which is concurrent with its initial drilling and will assist in the design of the second phase drill campaign.

A third program of drilling is also in the works and will target massive sulphide vein, or “MSV”, prospects generated via historical and upcoming electromagnetic, or “EM”, surveys just outside the main Ban Phuc ore body.

According to management, the initial IP survey test line run through the prospect area indicated a strong correlation between the high chargeability, low resistivity high-grade MSV mineralisation and the lower-grade DSS ore bodies.

Blackstone is the first company to attempt an IP survey at Ta Khoa and its success in defining base metal sulphide targets at the project to date means it will be utilised further in defining prospective areas across its extensive tenement holdings in Vietnam.

“We are excited to be able to commence drilling and use modern geophysical methods to define existing and new nickel sulphide targets. The initial results from the first ever IP survey at Ta Khoa suggest we have a new tool in our arsenal that should allow us to see targets that were not seen before.”

Back in May, Blackstone revealed that it secured an option to acquire 90% of the prospective Ta Khoa nickel project, which includes the mothballed Ban Phuc underground nickel mine.

The project also includes a 450,000 tonne per annum concentrator built to Australian standards and is located in an underexplored nickel sulphide district, only 160km west of Hanoi.

The previous owners ploughed more than USD$136m into the mine, generating USD$213m in revenue, during three years of falling nickel prices, before scuttling the project in mid-2016.

Ta Khoa is connected to a local hydroelectric power grid, with a fully permitted tailings facility and modern 250-person camp.

Blackstone has entered into a 12-month option period to purchase Canadian-listed AMR Nickel Limited’s 90% interest in Ta Khoa based on a cash and scrip deal worth about AUD$1.6m, with the opportunity to extend this by 12 months based on a further minimum exploration spend of AUD$1m.

According to company management, the acquisition will enhance the company’s existing battery mineral asset base, which already includes cobalt and nickel projects in Canada and the Silver Swan South nickel project in the Eastern Goldfields region of Western Australia.

Blackstone said it would also investigate the possibility of developing downstream processing infrastructure in Vietnam, which could produce nickel and cobalt products, to supply Asia’s growing demand in the lithium-ion battery manufacturing sector.

The Ta Khoa project is a potential company-maker and comprises a 50 square kilometre land package hosting more than 25 advanced MSV targets and many large DSS targets for evaluation.

While the previous owners focussed primarily on exploration and development activities at Ban Phuc, Blackstone will extend this reach for both MSV and DSS targets throughout its entire ground holdings, which will now be ably supported using ground geophysical surveying.

The short-term prize may lie within the narrow, high-grade MSV mineralisation recently mined at Ban Phuc that returned drilling intersections like 2.02m @ 4.64% nickel, 3.59% copper and 0.18% cobalt from 258.7m down-hole.

Such grades could significantly sweeten the high tonnage, but lower grade DSS ores located throughout the project area.

The company has hooked into some strongly prospective nickel-copper-cobalt ground in this region of Vietnam and will be chomping at the bit to uncover further riches, particularly now it has proven the effectiveness of ground surveying to locate subsurface sulphide occurrences.