Quarter of nation's construction in WA 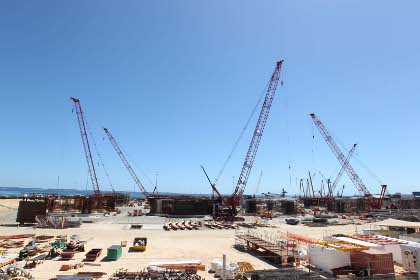 More than 25 per cent of all construction in Australia is occurring in Western Australia, where almost $90 billion worth of mining, energy and infrastructure projects are currently underway.

A report by Deloitte Access Economics, released today, said that much of the growth in the December quarter had been in definite projects, which were either under construction or due to commence.

Projects have increased 17.5 per cent over the year.

Of these, definite projects accounted for 415.4 billion of the value, a huge 43 per cent rise through the year.

One third of all projects currently under consideration are in WA, valued at $140.1 billion.

State Treasurer Christian Porter said the report demonstrated the durability of the WA economy in a period of economic uncertainty.

“While we are not immune to the pressures of the global financial markets, Western Australia continues to lead the nation with solid investment growth,” he said.

Mr Porter added that the report should send a clear message to the Federal government of the importance of the resources sector in WA to the national economy.

The report highlighted the role of the booming mining sector in driving the Australian economy forward in the face of cautious investment conditions.

Mining projects accounted for the bulk of the investment, with 46 per cent of committed projects mining related.

Treasurer Wayne Swan said the report was another example of the economy’s strong fundamentals.

“It shows why Australians can be confident in our country’s outlook,” he said.

Whilst the global economic forecast for 2012 is gloomy, the report said the strength of investment growth was positive news for the Australian economy.

“The value of projects underway provides a healthy buffer against a potential global slowdown in 2012,” said David Rumbens, a Deloitte Access Economics partner.

The volume of projects saw the strongest growth in business investment spending ever during the September quarter, despite other sectors of the Australian economy remaining in the doldrums.

Deloitte Access Economics expects investment levels in Australia to continue rising over 2011/2012 and in the following two years, with the mining sector accounting for 44% of the value of projects in planning.