Our vision is equal access to justice for everyone in Western Australia – Here we explain what the legal profession is doing to help achieve our vision. 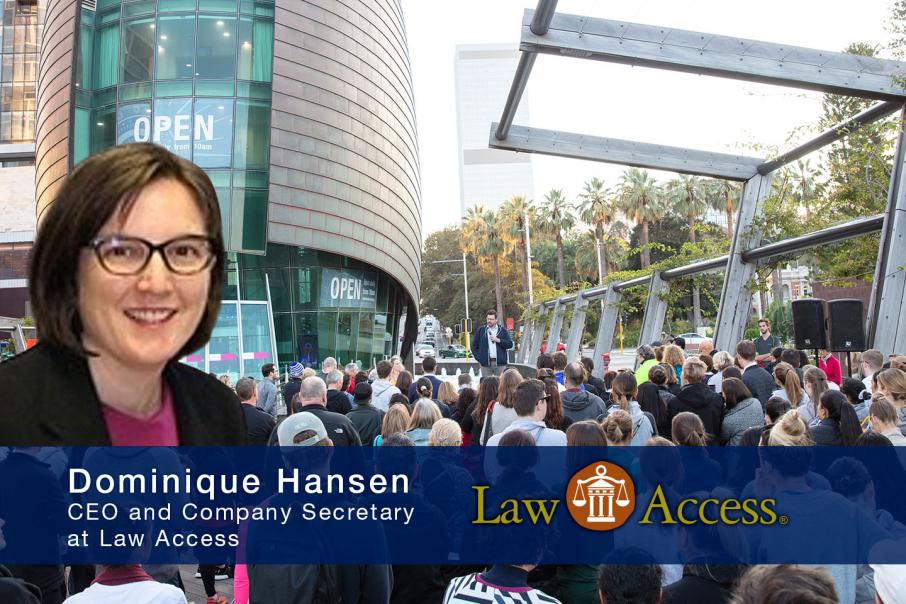 Law Access matches needy and vulnerable applicants, whose cases are assessed as having reasonable prospects of success, and not for profit WA Community organisations seeking legal assistance and advice, with WA lawyers willing to assist them pro bono (without charge).

Law Access is well placed to identify and highlight areas of unmet legal need, and opportunities for reform, to improve access to justice for all. More information about its impact and service can be found in its latest 2020 Impact Report.

Every year, on National Pro Bono Day during Law Week, the Law Access Walk for Justice is held, to acknowledge the pro bono contribution made by the Western Australian legal profession, and to raise funds so that this important referral service can be maintained.

This event is an early 4.4 kilometre morning walk from the Bell Tower along the river foreshore, followed by breakfast at Annalakshmi on the Swan. The Hon. Peter Quinlan QC, Chief Justice of Western Australia will launch and lead the walk, joined by “event ambassadors” from the judiciary, the Attorney-General of WA, the Hon. John Quigley MLA, the profession and the five university law schools.

This year, those walking this route in the CBD will be joined (“virtually”) by supporters walking the same distance in various other parts of Western Australia.

Law Access has produced a free 30-minute event podcast to unite, inspire and inform supporters, actual and potential. It can be downloaded here.  Three special guests are featured in this podcast, Mr Robert French AC, former Chief Justice of the High Court of Australia, and pro bono lawyers Eliza Fitzgerald and Hamish Glenister, who have taken many Law Access referrals.  They will relate some of their experiences, and tell you the positive impact made on the lives of those whose desperate need for legal assistance is ultimately met.

The podcast begins with a discussion of some of the most pressing access to justice issues in WA.

Mr Robert French AC identifies the high levels of indigenous incarceration in Western Australia, explaining that reducing incarceration rates requires a multi-faceted approach, one element of which is raising the age of criminal responsibility to take incarceration off the table for children as young as 10, who are presently coming into contact with the criminal justice system.

Eliza Fitzgerald, a family lawyer from O’Sullivan Davies Lawyers, explains how lack of legal assistance leads to self represented litigants appearing in Court, and the consequential delays in the Family Court. Eliza focusses her pro bono efforts on the most vulnerable applicants from culturally or linguistically diverse backgrounds, including Aboriginal and Torres Strait Islander People.

Hamish Glenister takes pro bono referrals in migration law matters in the Administrative Appeals Tribunal, the Federal Circuit Court and the Federal Court. He explains that the lack of federal legal assistance in migration law cases is a cost cutting measure which sometimes leads to greater cost imposts for the government, the courts and taxpayers, as Tribunal cases where applicants are unrepresented take longer, and decisions are more likely to go on appeal.

Hamish, who is also a criminal lawyer, discusses how the lack of funded legal assistance in Magistrates Court matters in Western Australia means that people facing potential imprisonment are often obliged to represent themselves, which raises the chances of an unjust conviction, as well as taking up a disproportionate amount of Court time.

He instances a case where he recently assisted, pro bono, an impecunious applicant, whose case had been adjourned approximately 30 times over the course of a year, before he received legal advice from Hamish and was for the first time able to understand and deal with the charge against him. Hamish highlights the cost to the Courts (and society) in this and similar cases, compared with the much lesser cost of funding legal representation at the outset.

Eliza and Hamish also explain why they undertake pro bono work. It is hoped that their enthusiasm and sense of duty will inspire others to offer to undertake, or support, pro bono legal work in the interests of justice.

The Law Access website at lawaccess.org.au provides information on how to refer someone in need of legal assistance, as well as how to become involved, either by becoming a pro bono lawyer, by providing your expertise and skills, or by making a tax deductible donation to enable this valuable community service to continue.