Our man in London’s Perth calling

John Atkins is back in town to help Anglicare WA usher in a new strategic plan. He joins outgoing chief executive Ian Carter to reflect on the history and future direction of the not-for-profit group. 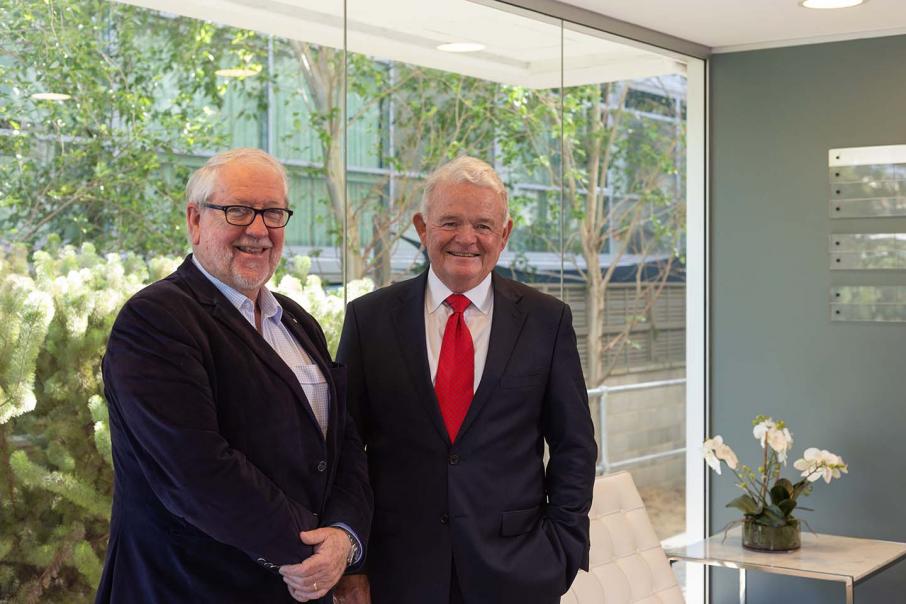 John Atkins (right) with Ian Carter, who plans to step down as CEO next year after a long career at Anglicare. Photo: Gabriel Oliveira

John Atkins is back in town to help Anglicare WA usher in a new strategic plan. He joins outgoing chief executive Ian Carter to reflect on the history and future direction of the not-for-profit group.

Experienced director John Atkins has returned home to Perth to chair not-for-profit organisation Anglicare WA after a near three-year stint as Western Australia’s representative in London.

Mr Atkins, who was agent general in London until June 2018, worked across 27 European countries while overseas, after leaving his Perth-based positions as chair of Lotterywest, and non-executive director of Australian Finance Group and Minotaur Exploration.

He previously held board positions with the Chamber of Commerce and Industry of WA, ANZ Banking Group and the Committee for Perth.

He takes over from Anglicare’s outgoing chair of 10 years, John Barrington.

Mr Atkins told Business News his time in London had solidified his plans for the issues he would like to tackle at home.

“One of the joys of my time in London – and there were many – was that I was able to sit back and think what I want to do with the rest of my professional life when I come back,” he said.

“I had to give up everything to go to London, I wasn’t able to keep any board positions at all.”

He identified three key areas he wanted to have an impact on: youth disadvantage, indigenous disadvantage and education.

Anglicare had ticked all three boxes, he said.

“And I thought, this fits pretty well with what I’ve been thinking about.”

Mr Atkins hopes to transition back into his career as a professional director after settling into his position with Anglicare.

“In the for-profit sector, I’ve been on boards across many industries, so I’m more interested in finding something that is stimulating, with great people, where I feel I can make a difference,” he said.

“I will be hoping I can sit on a few boards, help a few companies, and maybe do some consulting.”

During his time in London, Mr Atkins has gained insight into the relationship between Australia and the UK, which he said was undergoing significant change.

“I think now is a really good time for Australia and England to re-look at their relationship,” Mr Atkins said.

“When the UK went into the common market in 1973 they were seen by many in Australia as turning their back, and to a large extent I think that was true.

“The result of that was Australia turned to Asia, and some would argue that’s the best thing that ever happened to us.

“But now with the UK leaving the EU, they are looking towards us, and looking to become a free-trading nation.

“They want to learn from Australia, which is a different relationship to what it has been in the past.

“We have 86 different service types, and we operate out of almost 50 locations across WA,” Mr Carter told Business News.

“When I started at Anglicare in 1995, we were metropolitan focused.

“We would have seen a couple of thousand clients; we now have a reach and impact on 35,000 clients.”

Mr Carter recently announced he would step down from his role in 2019, or as soon as a suitable replacement was found.

“There’s a period there, but it’s pretty open ended,” he said.

“The board was quite clear that they wanted the capacity if necessary to go back to market.”

Poverty, domestic violence, unemployment and homelessness are areas that have remained prevalent, motivating Anglicare to find the most effective methods of impact.

Mr Carter is keeping his options open for the future, and said that leaving the role would allow a new chief executive to implement Anglicare’s 2019 strategic plan.

“I feel like Anglicare has won a lot of premierships over the last 24 years, and done some remarkable things,” he said.

“We’re on trajectory to keep doing that.

“But for the long-term trajectory of the organisation, we need a new CEO.”